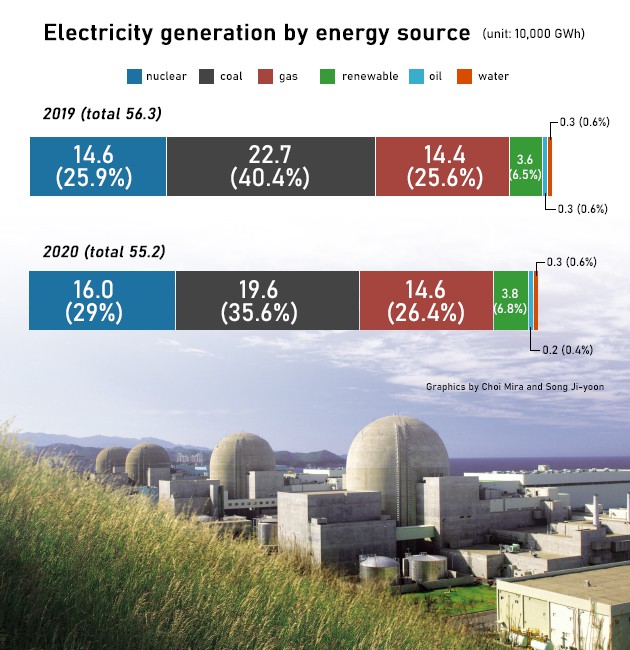 According to the data released by state-run utility company Korea Electric Power Corp. (KEPCO) on Tuesday, nuclear reactors generated electricity of 160,184 gigawatts hours (GWh) in 2020, up 9.8 percent from the previous year. The volume exceeded 160,000GWh for the first time in four years, as plants after repair were plugged back on.

Power output from coal-fired plants dipped 13.6 percent from a year ago to 196,489GWh in 2020. The state-led policies to reduce fine dust level in the air and cut greenhouse gas are behind the steep decline. The volume fell below 200,000GWh for the first time in 11 years.

Renewable energy sources produced electricity of 37,804GWh, up 3.9 percent from the previous year, although their power generation capacity jumped 30 percent on year to 20.9GW on the back of the government’s push for clean energy.

Renewable energy accounted for 16.1 percent in the entire power generation capacity, up from 12.8 percent, but its portion in the actual power output edged up just 0.3 percentage points to 6.8 percent.

An industry official said it is difficult to generate electricity fully from renewable energy sources because of intermittency. For instance, most solar panels provide energy efficiency rate of around 15 percent.

Total electricity generation in the country dropped 1.9 percent from a year earlier to 552,165GWh last year due to the impact of the Covid-19 pandemic. The output declined for the second consecutive year.