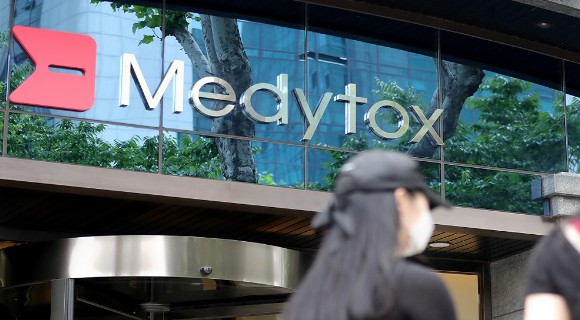 이미지 확대
The dignity of Korea’s health authority has come under challenge due to face-losing court stay order on its administrative suspension on wrinkle-removing botulinum toxin maker Medytox.

The Ministry of Food and Drug Safety said it remains to be seen how the ongoing court cases will play out regardless of the preliminary rulings, but the industry is questioning if ministry’s repeated sales ban and license revocation despite court dismissals are justifiable.

Since April last year, the ministry has imposed the measures against three botox products from Medytox six times in a row, but all were overturned in preliminary injunctions by local courts.

The latest case came on Jan. 18 when the ministry notified Medytox of label cancellation for liquid botox product Innotox. Medytox immediately filed a suit to nullify the administrative order along with a court stay. The Daejeon District Court warranted an injunction, challenging the ministry’s judgment.

The ministry took similar measures against Innotox in December last year, but they were overturned in favor of Medytox. The ministry and Medytox got mired into legal dispute two times in the past. The first one happened on Apr. 17, 2020 when Medytox products (50, 100, 150 units) were banned based on investigations that the products were manufactured with unlicensed ingredients.

Medytox filed a suit with the Daejeon District Court two days later. The court dismissed the company’s injunction motion, but the Daejeon High Court ruled in favor of Medytox, suspending the force of the administrative measures. The ministry went on to announce label cancellation on the products on Jun. 18, but Medytox successfully nullified it with the same legal process.

The case eventually went to the Supreme Court where victory was won by Medytox in October and November.

On Oct. 19 last year, the ministry issued similar orders against all Medytoxin products and another botox brand Coretox, but Medytox again stood against it with injunction, which was accepted by the Daejeon District Court on Nov. 13.

On the same day of the court’s decision, the ministry issued an administrative disposition to cancel the products’ license, while Medytox took a legal response and received suspension of the issue. The case is now pending before the Supreme Court.