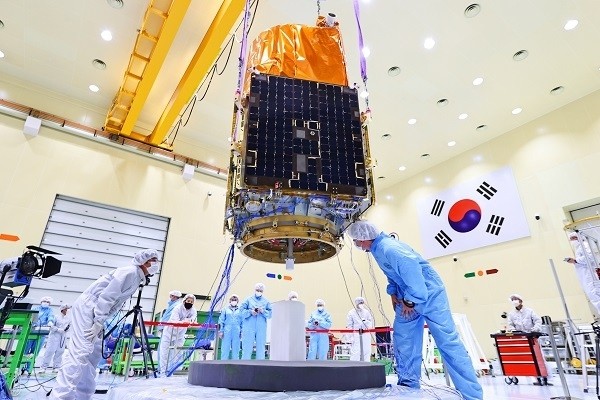 [Photo provided by Ministry of Science and ICT]

South Korea will spend 615 billion won ($548 million) on launching its first locally built rocket Nuri and medium-sized next-generation satellites this year in hopes of catching up global space leaders such as the United States and Russia, according to the government’s action plans revealed on Monday.

Under the country’s space plans announced by the Ministry of Science and ICT, Korea`s second carrier rocket Nuri, also known as KSLV-Ⅱ, will be launched in the Naro Space Center, Goheung County, South Jeolla as the country’s indigenous three-stage flight model is in a final development and trial phase.

Currently, a combustion test for a one-stage certification model that bundles four 75-ton engines is in progress. A new launch pad for the Nuri rocket will also be built and simulation training for inspection of the launch site tracking system is planned.

The maiden launch of the country’s much-awaited first homogenous space rocket Nuri was initially planned in February but the ministry in December last year delayed it by eight months to October. The second launch was set at May 2022 instead of October.

Korea send its 140-ton Naro rocket into space in 2013 after two failed attempts, but the rocket’s first-stage, main rocket, was built with Russian technology.

The ministry also announced that Korea’s first mid-sized next-generation satellite will be launched atop a Russian built Soyuz rocket from Baikonur Cosmodrome in the Republic of Kazakhstan in March. The satellite for precision ground observation was indigenously developed and will be used as a `standard platform` for a 500kg satellite.

The country will develop a geostationary public multi-purpose satellite (Cheollian 3) based on this platform. The new satellite will serve as a test bed for disaster and safety response, GPS signal correction, and future satellite communication technology, such as monitoring flood disasters and supporting maritime activities.

Three next-generation mid-sized satellites are currently being developed, and two others will enter development next year.

Multi-purpose satellites No. 6 and 7, which are being developed to provide various public services such as national security through all-weather ground observation, will be in a final stage for assembly and functional tests with the aim of launching in 2022.

In the space exploration sector, a payload that will be loaded onto Korea`s first ‘moon exploration orbiter` to perform missions such as lunar surface photographing is assembled with an orbiter, and an assembly test of the lunar orbital system will be conducted with launching due in 2022.

Four 10kg-class nanosatellites that will be used for basic research to understand space weather and respond to space disasters are scheduled to be launched in Kazakhstan in the second half of this year, which will be led by the Korea Astronomy and Space Science Institute (KASI).