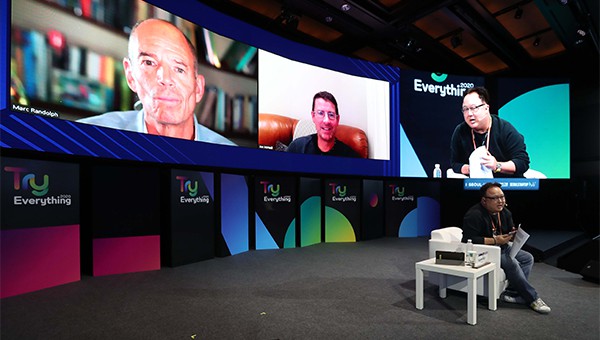 “The biggest mistake I found in a lot of startups is a lack of focus,” Marc Randolph, co-founder of Netflix, said in a virtual session for startup entrepreneurs at the World Knowledge Forum in Seoul on Friday.

“Everything is on fire in a startup, crying out for help, and you don’t have the bandwidth to handle it all,” he said. “You have to triage. Pick two or three things that are the most important. It may be hard to close your eyes to what’s burning all around you but you have to focus.”

He was joined online by Jon McNeill, Lululemon board member and former Tesla president, who stressed the importance of finding the right talent.

“There is no substitute for talent in business,” he said, adding that he would sometimes devote 40 to 50 percent of his time on recruitment. “Find the person who is the best in the field. Network like crazy.”

Both Randolph and McNeill admitted they had never tried to start a company on their own and highlighted the importance of working as a team.

“The job is so lonely to begin with so it’s critical to have a partner who can do half of the heavy lifting and with whom you can bounce ideas off of,” Randolph said.

“There are times when you run out of gas and need to feed off of someone else’s energy,” McNeill agreed, adding that the most difficult thing about the current pandemic was not being able to be in a room with others physically and tap into that positive energy.

They both acknowledged that there are vastly more material and financial resources for today’s would-be entrepreneurs, making it easier and faster for today’s startups to get their ideas off the ground.

“Back then, we had to build everything from scratch and the path from having an idea to validating that idea was long and expensive,” Randolph said. “Now, the tech stack is so good and the process of validation a lot faster and cheaper, which has freed up people to focus more on their primary ideas.”

While money has also become more readily available, it has come with its own set of problems. Randolph bemoaned the current culture that has “glorified” the world of entrepreneurship and said so many entrepreneurs were getting in for the wrong reason. “I want people to go in here because they want to solve problems, not because they’re looking for some path to fame and fortune,” he said.

Randolph advised Korean startups to start thinking about going global early on and likened the process to riding a bicycle downhill on a rugged trail.

“You have to look right in front of you to avoid the bumps and obstacles but periodically have to lift your head up and look far ahead to see where you’re going,” he said. “Likewise, you have to focus on getting it right in the local market, working out the business and the product. But if you’re not looking out internationally, you’ll be unprepared to scale beyond your borders.”

Many successful entrepreneurs tend to have a predisposition to action, Randolph noted, and advised people to “do more and think less.”

“If you have an idea, do something, build something, test something. You learn more doing it in one day than six months thinking about it,” he said.

McNeill advised aspiring entrepreneurs to gather as many people when building a startup as it could be one of the loneliest jobs in the world. “Find mentors and peers you can trust. It will make the journey a lot more enjoyable.”