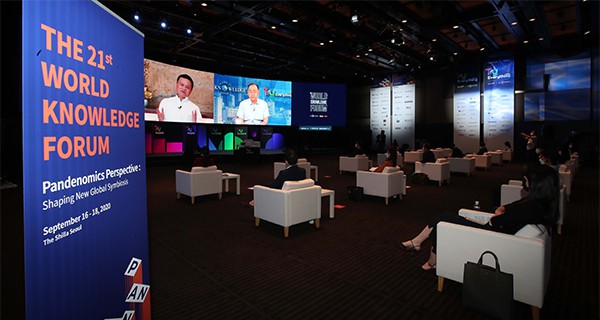 이미지 확대
The world is in urgent need to find “new leadership” to encourage people and countries around the world to “work and unite together,” said Jack Ma, founder of Alibaba Group and Jack Ma Foundation.

Although he believes the world has the capability to overcome this crisis as in the past, the “lack of new leadership and global solidarity” poses more serious problems for the global society than Covid-19, Ma said during a talk with Ban Ki-moon, former Secretary-General of the United Nations on Friday at the 21st World Knowledge Forum in Seoul.

Ma founded Alibaba Group in 1999 and has grown the business into one of the world’s largest technology giants focused on e-commerce, retail and internet with its value reaching estimated $700 billion. He has devoted himself to philanthropy through his foundation from last year.

The world should “unite together and work together” to fight the war against poverty, disease and environment destruction, Ma urged. In order to do so, “we need leadership more than anytime” that can guide us how to solve the world problems and what we should do together and unite each other, he said.

Ban agreed by saying that “no single country, however powerful, cannot do it alone.”

When Ban raised the roles of the UN Sustainable Development Goals (SDGs) and Paris Climate Agreement are important guidelines and framework for the world to work together, Ma sighed “we have all the resources but do not use them efficiently because we don’t have leadership.” 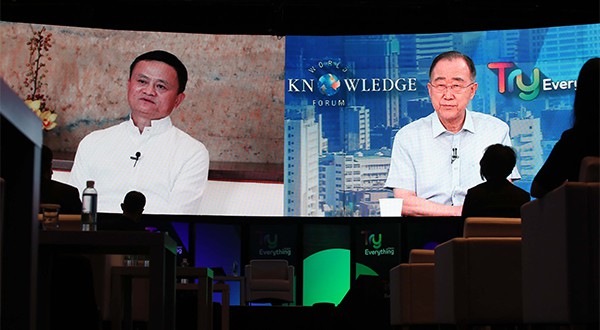 이미지 확대
The pandemic is an opportunity to unite and help each other, Ma said while emphasizing the need to have “education, women leadership and entrepreneurship” to solve global problems and make progress in achieving the goals.

Ma advised young entrepreneurs “believe in future, believe today is a great time to start business, and find a good team to work together.” He also stressed the importance of “starting from small” no matter how big the dream is.

He said he believes the “digital economy” will “empower young people, developing countries and small companies,” so we have to move fast to make sure every business, school and country can be digitized.

The virtual world enabled by technology after Covid-19 would be more efficient, but without a “new leadership,” the world would be set apart and it will be “disturbing,” as we still need the real world, he said.

As a philanthropist leading Jack Ma Foundation, he said philanthropy is “not about giving money but about encouraging people to take actions.” It takes time and action, rather than money, for global leaders to wake up people and put heart in addressing global issues to bring changes, he added.