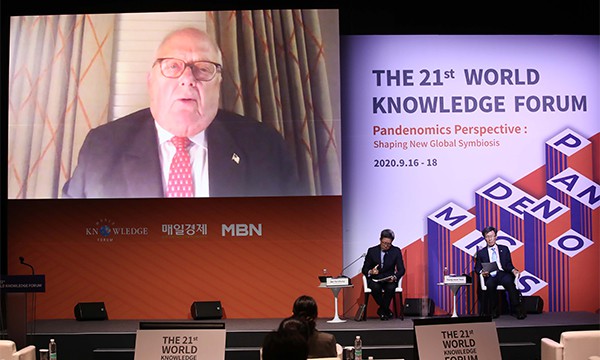 이미지 확대
The new Cold War-like hegemonic struggle between the United States and China is expected to continue, regardless of who wins the next U.S. election, diplomatic experts agreed.

“We have to realize that this competition between the two powers is likely to last for some time,” said Edwin Feulner, president and co-founder of the American conservative think tank Heritage Foundation, as he joined virtually for a session on “The Second Cold War” at the World Knowledge Forum in Seoul on Thursday.

Even if President Trump loses his bid for re-election, the U.S. is unlikely to go back to the pre-Trump era of “good relations” with China. “It’s not just economic issues that are at stake but strategic issues, military issues, rule of law, and human rights issues that are at the forefront,” Feulner said.

Qiu said it was “not China’s intention to challenge the U.S. or replace its status” and that the current conflict is different from the previous Cold War as the China and the U.S. are highly integrated economically.

But he argued that the current U.S. containment was largely an effort to “delay China’s development” and “ensure America’s absolute advantage in every facet.”

“The current dispute has mainly been provoked by the U.S., with China forced to respond against America’s extreme suppression to prevent a full confrontation,” Qui said.

He warned that the U.S. efforts to decouple the American economy from China would not only “damage the world economy” but end up having a “greater impact on the U.S. than China.” 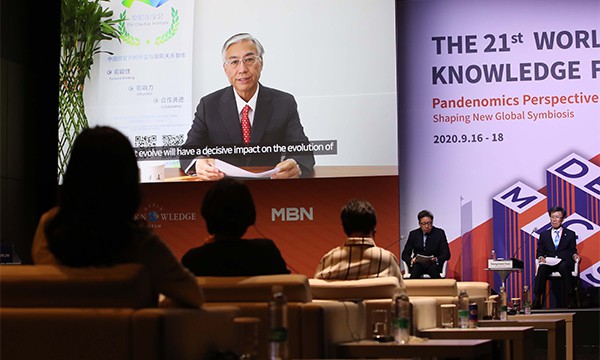 이미지 확대
The widening conflict between Washington and Beijing puts Seoul in an awkward position, demanding it to face a moment of truth, said former Korean Foreign Minister Yoon Young-kwan.

“Korea has to accept the reality of this new normal of severe strategic competition between China and the U.S.,” he said. “Korea’s diplomacy needs to help both superpowers establish a kind of modus vivendi, or peaceful coexistence, if we are to avoid difficult situations of having to choose one country over another.”

Yoon said that in this time of great political divide, it is important for the top U.S. leader to mobilize political support and form a coalition of like-minded countries to persuade China to respect international rules and lead a new way toward coexistence.

For China, he advised prudence in implementing foreign policy as its ambitious projects like the Belt and Road initiative and efforts to exert more power in Asia and Eurasia could antagonize neighbors and cause them to form a united anti-Chinese front.