WKF: Covid-19, economy to be make-break point in US election: Priebus 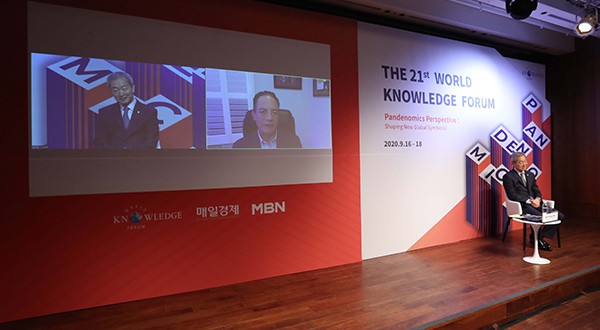 이미지 확대
The American verdict on Covid-19 and economic management would make or break the chances of U.S. President Donald Trump extending his term after the November election, said his former campaign strategist and chief of staff Reince Priebus who had been credited for putting the business mogul into the White House four years ago.

“Who can handle the coronavirus and who can deal with the economy afterwards would decide (the election results) by a mile,” Priebus said as he joined to a virtual session at the World Knowledge Forum in Seoul to assess the four years in Trump administration and the outlook on the upcoming U.S. presidential election.

“As far as achievements go, from the perspective of policies and substances, the president (Trump) should walk away with the election,” he said, although he admitted the race would be a “close” one.

Despite his short six-month tenure in the White House, Priebus stayed loyal to Trump and approved of his “fiery” style that had made things done – strengthening the economy through tax cuts, spending, and deregulations (until the COVID-19 fallout), bringing troops home, crushing terrorist organizations and getting answers to the global threats – China and North Korea.

He found the Democrat presidential candidate Joe Biden campaign too week as it focuses its offensive entirely on “style” of Trump, not policies and substances. He did not think “Americans would want to return to normal” by choosing Biden as “people want to continue fighting, breaking plates and dishes in Washington.”

He predicted Trump to “double down or triple down” on China and “America First” policy once he wins a second term. “He would likely do more to get us out WTO, increase pressure on China and not be as subtle in the first phase deal with China if he gets re-elected,” he said.

He also projected one of the first things Trump would do after earning another four years in office would be meeting with North Korean leader Kim Jong-un “to get some kind of incremental concession to show goodwill to the region.”

But he went to advise his boss to seek “more balance in law and order and racial harmony.”