WKF: Global recovery is on its way, put money in tech powers like China, Korea 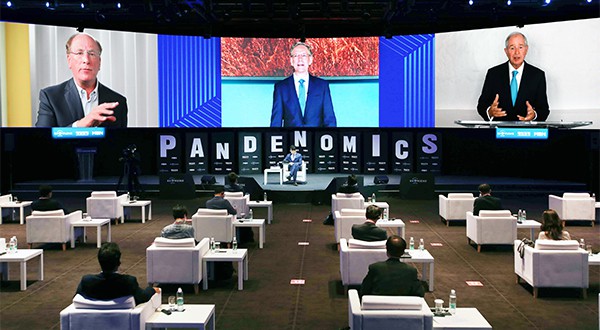 The global economies will pick up within six months of arrival of vaccine or cure for COVID-19, but policies won’t quickly shift to tightening as inflationary pressure poses less of a concern, investment gurus agreed, advising investors put money in technology powerhouses like South Korea, the U.S. and China.

The World Knowledge Forum brought together Wall Street pundits - Blackstone CEO Stephen Schwarzman, BlackRock CEO Laurence D. Fink, and Capital Group Co-president Robert Lovelace – in the first day of the 2020 conference on Wednesday held live-streamed from Seoul at the hosting of Maekyung Media Group for investment tips and guidance on the global economy during the times of uncertainties.

“I believe we can already see the peaks on the other side of the valley,” Lovelace said as he began his speech for the “Post COVID, World Economic Diagnosis by Wall Street Big Shot” session. We need to “separate out the pandemic, what`s happening with the economy and the recovery, and the movements in the market…They`re clearly linked, but those links are much less strong than people assume,” he stressed as he suggested societies across the world has been learning to cope with the pandemic.

There have been flare ups of COVID-19 infections but their impact on people and economy has been “diminishing” and the “pattern of diminishing impact will continue to reduce the fear and accordingly, the economic impact, so businesses can pick up,” said Lovelace.

He suggested the current economic cycle has been very different from the past, predicting “deliberately controlled policy action” and the “unwinding” of the actions can bring about “a reversal.”

“With interest rates close to zero, equity markets play a crucial and central role in helping people generate the wealth they need for their future."

Schwarzman also showed the same optimism about the recovery. He expected many of the “medical breakthroughs” to happen within the next six months would help accelerate the economic recovery.

He also forecasted world’s major central banks would keep their monetary policy loose to support economic recovery. He suggested the inflation was not the big worry but the deflation seen around the world.

For the long-term investment option, he proposed China despite the ongoing disputes with the U.S.

“I think that these two countries overtime are going to have to find a way to live together in a more harmonious manner than it certainly looks like at the moment,” said Schwarzman as he reminded the two countries account for between 35 and 40 percent of the entire world`s economy.

Fink also picked China as a place for long-term investment.

“I believe China is going to be a great long-term destination for capital. And I do believe the success of China will lead to better investments throughout Asia.”

He also found the U.S. market appealing for its strength in universities, especially those related to science and technology, which he believes as the right place to keep money over a long horizon.

Fink stressed on investing in places with strength in technology and pinpointed to Korea, the U.S. and China.

“You need to be focused on what is going to transcend time in terms of your investment criteria and the continuation and investing in biotech and technology as over allocation will continue to be a net winner,” he said.