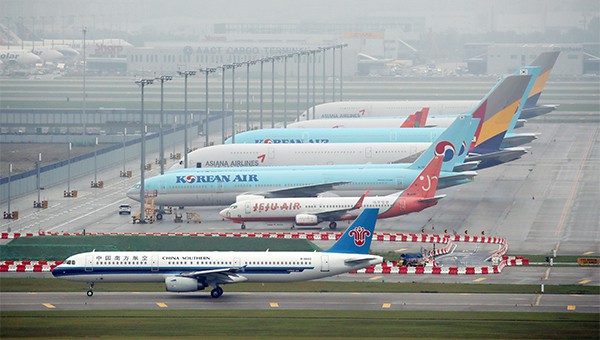 Incheon International Airport Corp. (IIAC) is considering a hike in passenger service charge (PSC), known as airport tax, and send employees on leave of absence as it is projected to post its first annual loss in 17 years this year due to a plunge in air travel amid virus pandemic.

According to internal documents obtained by Yoo Gyeong-joon, a United Future Party lawmaker part of the strategy and finance committee at the National Assembly, on Wednesday, IIAC is expected to report a net loss of 324.4 billion won ($272 million) for full 2020 on sales of 1.2 trillion won, down 55 percent from 2019. It would be the first time for South Korea’s main gateway operator to log loss in 17 years.

It is expected to only recover its revenue to the 2019 level in 2024 while recouping only 60 percent of last year’s net profit.

According to the documents, IIAC’s debt is forecast to jump 6 trillion won by 2024 from last year, with the debt ratio surging from 31 percent to 86 percent during the same period.

As part of efforts to narrow loss, IIAC is said to have discussed a plan to hike international airport tax next year by 3,000 won from current 17,000 won during an emergency management meeting last week.

IIAC estimated that the 3,000 won rise in passenger service charge would bring in 340 billion won in profit over four years until 2024.

Airport tax is included in the price of flight tickets along with fuel surcharge. An increase in airport tax means higher airfare.

As an immediate plan to narrow anticipated loss this year, IIAC is seeking to reduce business expenses and labor cost. The corporation expects to save up to 44.1 billion won by sending employees on one-month leave on reduced pay, cutting unnecessary business expenses, and minimizing basic expenses such as for meetings.

But the potential hike in airport tax has already brewed controversy after the anticipated losses are caused by a plunge in the number of traveling passengers due to the COVID-19 pandemic. Despite such losses, the airport operator recently decided to grant about 2,000 contract workers regular full-time employment status this year, sparking criticism over the company’s move to cover loss by sacrificing existing employees and increasing the public burden.

In a press release, IIAC defended its move to hike airport tax by arguing that its passenger service charge has remained unchanged for 16 years since July 2004 and is lower than other international airports.