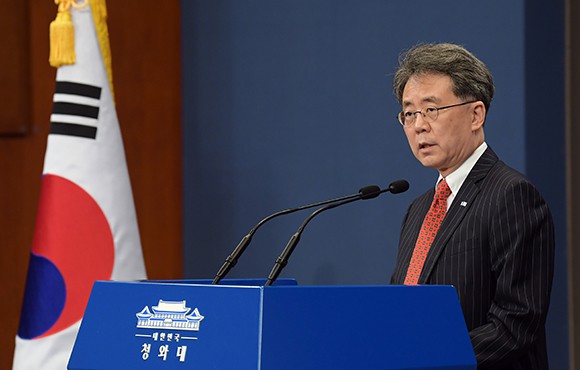 South Korea is now free to research and develop solid-propellant space rockets under the revised missile guidelines with the United States, a move that is expected to help enhance the national military capabilities and upgrade the country’s space technologies.

“Today, (the two sides) have adopted the 2020 revised missile guidelines including a complete lift of the ban on the use of solid fuels for (Korea’s) space rocket launches,” Kim Hyun-chong, deputy national security adviser at the Blue House, said on Tuesday. The change is effective immediately.

This means “all companies, research institutes, and individuals in Korea will be able to freely research, develop, produce, and possess various forms of space launch vehicles” ranging from liquid-type ones to solid-propellant and hybrid ones, added Kim.

In a briefing, Kim expected the amendment would serve as a momentum for the Korean military to make great strides in its surveillance patrol capability and create foundation to improve space infrastructure, paving the way for Korean New Deal to stretch to space.

Hence, the development of solid-fuel space rockets was impossible under such the restriction, Kim said.

It took about nine months for Korea and the U.S. reached an agreement on the new revision since President Moon Jae-in in October ordered Korea’s National Security Office to contact National Security Council in the U.S. to resolve the issue.

Industry insiders expected the revision in the missile guidelines should lead to enhancement in Korean military intelligence, surveillance, and patrol capabilities, bring in more young talented individuals to seek career in the space industry and allow the Korean space industry make a leap forward. It is also a sign of stronger Korea-U.S. alliance, they said.

Korea’s missile guidelines with the U.S., meanwhile, have been amended four times, including the latest revision, since the first agreement in 1979 to limit Korea’s ballistic missile development capabilities. The previous revision was in September 2017 and lifted ban on missile payload while restricting Korea`s ballistic missile range to 800 kilometers.