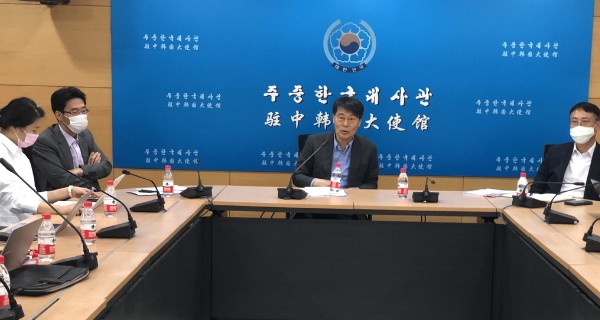 The Chinese government will resume visa issuance to South Korean students, workers and those who have a valid residence permit around early August in what would be Beijing’s first easing in visa ban since the outbreak of coronavirus, according to a Korean top envoy to Beijing.

“China has agreed to issue visas for three groups – students, employees holding Chinese work visa called Z visa and people with valid residence permits,” Korean ambassador to China Jang Ha-sung said during a press conference in Beijing on Monday. The visa issuance is expected to resume in early August, according to the briefing.

But those with expired residence permits would not included in the grant, and Jang said the issue needs a further discussion with China.

Beijing has banned the entry of foreigners to the country since March 28 including even those with valid visas and residence certificates to prevent the spread of COVID-19.

The South Korean embassy in China also is in talks with the Chinese government to increase flights between the two nations. Jang previously told reporters that he would make his utmost efforts to resolve the visa issue to help Koreans earning their livelihoods in the country and increase flights on condition that the two countries get the outbreak under control.

The Korean embassy said total 26 flights were operated to bring 3,700 or more Koreans to China from May 1 to June since the two governments introduced a fast-track entry policy to exempt strict quarantine for business people with negative coronavirus certificate. Jang said he asked companies to allow Koreans living in China to use the flights when they return to Korea

By Kim Dae-gi and Choi Mira