Koreans enraged by tax bombardment on the property-rich 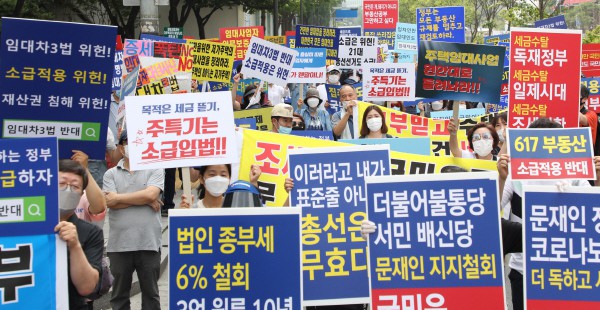 Angry South Korean homeowners are taking to the streets to protest against the government’s multiple tax hikes and property regulations that have only further fanned housing and rent prices.

More than 1,000 people are expected to gather in downtown Seoul for a candlelight rally Saturday night. Organizers project the turnout to double that of last Saturday, given the increased public outrage over the government’s “punitive” taxation policies on home ownership.

“The government is treating ordinary citizens as criminals and trying to drive them out of their homes by throwing a punitive tax bomb,” said a member of the rally organization.

They argue that the June measures have hit not only multiple-home owners but also people with just one home, raising their property ownership taxes by nearly 30 percent from the previous year. Tightened loan regulations have also been applied retroactively, forcing many people to forfeit the rights to buy newly built apartments. They claim that increased protection for tenants has also come at a steep cost for landlords.

Some are readying a class action against the government, finding the new measures unconstitutional.

The Moon administration has unleashed 22 measures over the past three years to curb housing speculation. The latest measures announced on July 10 further raised taxes on multiple home owners and hiked capital gains from property sales.

By Chung Ji-sung and Kim Hyo-jin