The constitutional court on Thursday unanimously dismissed the petition filed by a self-employed businessman, who contended that the existing minimum wage law that counts the statutory time-off pay into wage calculations “infringes on contractual and employment freedom.”

“Since time-off pay is legally mandated, it is reasonable to include those paid time-off days in the minimum work hour compensation,“ the constitutional court said.

The court did acknowledge the increased burden on small businesses from the sharp rise in the minimum wage under President Moon Jae-in. 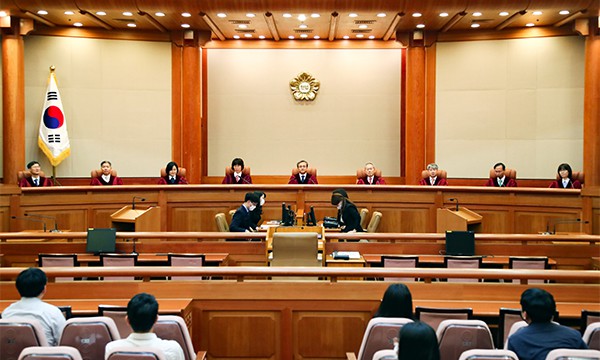 Moon came into office in May 2017 on a campaign pledge to raise the minimum wage to 10,000 won by 2020. Wage hikes formed a key pillar of his so-called income-led growth policy, which involved lifting wages to drive demand and further economic growth.

In December 2018, the minimum wage rules were revised to include statutory time-off days in the minimum wage calculations. Under local laws, employees working 15 hours or more a week are paid for the eight hours on Sunday.

The Korea Federation of Micro Enterprises, an association representing small mom-and-pop stores, balked at the court ruling, saying that the move would force more employers to slash jobs or go out of business.

By Seong Seung-hoon and Kim Hyo-jin