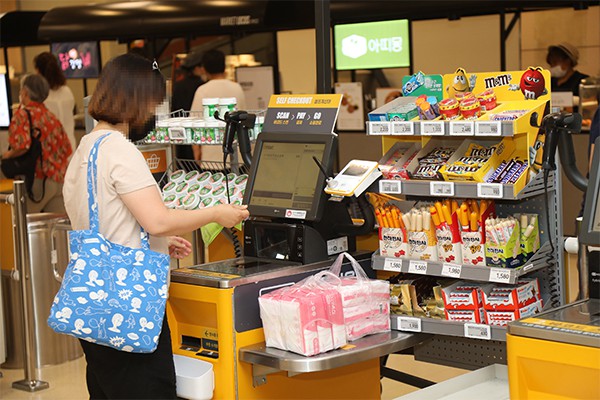 More and more shops in Korea are turning staff-less with self-ordering, self-serving, and self-checkouts catching on fast amid undying virus risks.

According to industry sources on Monday, big-box store chain E-Mart has increased the number of cashierless counters to 700 from 550 as of late last year. Outlets with the unmanned checkout system also rose to 110 from earlier 95, taking up 78 percent of all stores across the country.

Another discount store chain Lotte Mart expanded the self-checkout counters to 512 from 441 and the stores with the system to 50 from 46 during the period.

Homeplus now has 88 outlets with 399 self-service counters, out of all 140 locations.

The unmanned checkout counter has a barcode scanner, enabling shoppers to scan barcodes of goods themselves for payment. Various payments options like credit cards and mobile payments also are available for convenience.

The system is spreading fast to the entire retail industry.

Convenience stores also are active in the development, adding more self-service counters. The country’s No. 1 convenience store chain CU gave an upgrade to its checkout system to allow shoppers to complete the payment themselves. Customers showed higher satisfaction to the system, with 30 percent out of all payments since the upgrade made by themselves, according to the company.

The use of self-service counter jumped more to 45 percent after the virus outbreak, said a CU official.

Another chain GS25 recently launched a cashier-less location, similar to Amazon’s Go stores, in partnership with credit card issuer BC Card in Seoul. As the store has no checkout counter for payment, customers can enter the store by scanning a QR code on BC Card’s Paybook app at the speed gate and all items are automatically paid at the exit by analyzing the shoppers’ behavior and the change in weight on the shelves.

Some now raise concerns about job cuts following the automation. Retailers claim there would be no change in payroll due to the development.

“Cashiers will be deployed for other assistance,” said an official at a large discount store.

By Kim Tae-sung and Lee Ha-yeon