Three out of 10 live alone in S. Korea and 40% are unemployed: census report

이미지 확대
Three in 10 households in South Korea lived alone as of last year, and of them 40 percent did not have a job, latest census report showed.

According to data released by Statistics Korea on Tuesday, the number of single-member households reached 6.039 million as of October, last year, up 4.3 percent from a year ago. The number of people living alone surged every year after reaching 5 million in 2015.

Statistics Korea said that the sharp increase comes as many young Koreans stay unmarried after separating from their parents and fast aging phenomenon in the society.

Data showed that single-person households accounted for 27.4 percent of all family units in 2014, but increased sharply by 2.5 percentage points in only 5 years.

The number of those residing alone and employed reached 3.671 million as of October, last year, up 3.8 percent from a year ago. Data showed that 60.8 percent of single-member households were employed, meaning that about 40 percent were jobless. Statistics Korea said that the high rate comes as a many single-person households are aged 60 and over whose employment rate is low. 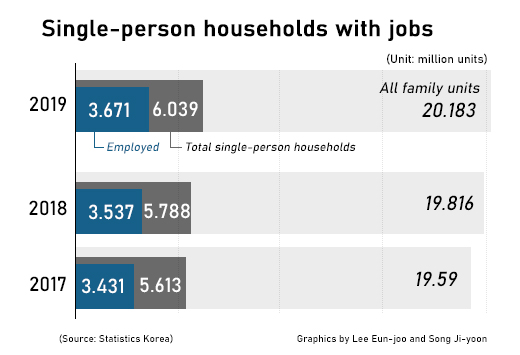 이미지 확대
Among single-member households and employed, 79.3 percent were wage earners and 20.7 percent self-employed. Among wage earners, 69.4 percent were regular employees, up 1.1 percentage point from a year earlier.

Data showed that one out of every three single-person households were low wage earners of less than 2 million won a month.

The average weekly working hours for men was 42.7 and for women 37.2, each down 0.7 hours and 0.8 hours from a year ago. A majority 39.7 percent of those living alone and employed were engaged in personal business and public service sector, followed by 19.7 percent in wholesale and retail sector and restaurant and accommodation industry.

Three out of 10 live alone in S. Korea and 40% are unemployed: census report