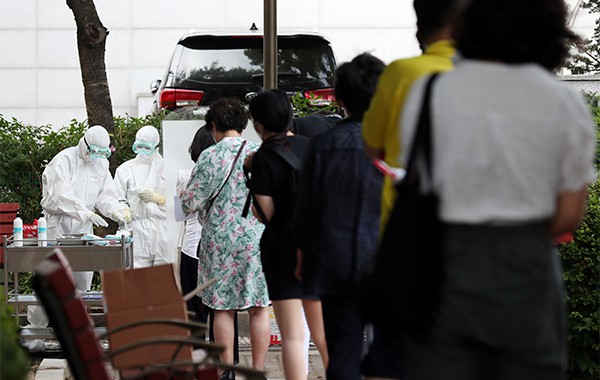 The coronavirus pandemic continues to rage on globally despite hopes of the warmer weather slowing the outbreak, with South Korea also seeing an uptick of cases in Seoul and the metropolitan area.

South Korea added 115 new cases over the weekend, reporting 67 new cases on Saturday, its biggest daily rise in over three weeks. The number of new infections has remained between 30 and 60 since late May, with most of them coming from Seoul and Gyeonggi Province.

As the daily count remains in double-digits, the Korean government has added four new sites – door-to-door sales operators, logistics centers, large private academies and buffet restaurants – to its list of high-risk venues. These places are mandated to keep an entry log and have everyone wear masks, or face a shutdown or fine of 3 million won ($2,472).

The strengthened measure comes as these sites have lately emerged as the country’s new virus hotspots. Infections linked to a door-to-door health product seller called Richway in Seoul’s Gwanak have now reached 194. About 17 cases have been traced to the Lotte Confectionery logistics center in Uiwang, Gyeonggi Province.

Daejeon in South Chungcheong Province added 10 new cases on Sunday, prompting the city to tighten its social distancing measures just 45 days after easing the policy. Nine of the 17 major cities and provinces have reported a new case of COVID-19.

More than 42 percent of Korea’s total coronavirus cases are those aged 50 or older, according to the Central Disaster and Safety Countermeasure Headquarters.

The World Health Organization warned the world has entered “a new and dangerous phase” after reporting a record daily high of 150,000 new cases last Friday. Nearly half of the new infections were from the Americas, with Brazil hitting a grim milestone of 1 million cases after the United States. India tallied 395,000 cases, Iran 200,000 and Pakistan 170,000.

In the latest week, Korea reported an average 14.8 new daily cases from foreign arrivals, mostly from Southeast Asia and Asian countries other than China. In response, Seoul on Sunday announced it would strengthen visa and entry restrictions for those from Bangladesh and Pakistan starting this week.