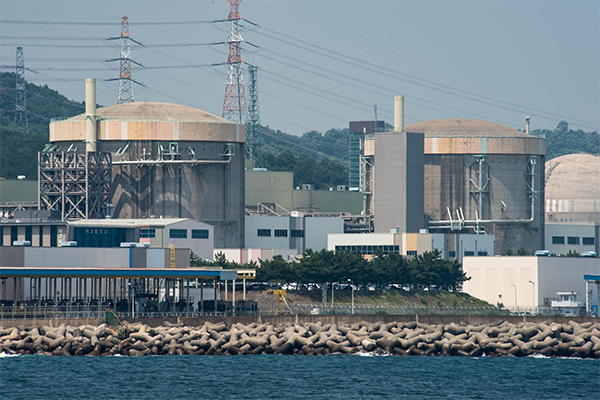 이미지 확대
South Korean nuclear reactors responsible for nearly a quarter of the country’s power supply at cheap price could undergo disruption due to shortage of space to store spent nuclear fuel.

According to the committee for reviewing spent fuel management, temporary storage units called Macstor at the Wolseong plant in Gyeongju, about 300 kilometers southeast of Seoul, are now 97.6 percent saturated, and will be fully saturated by March 2022. The time has been extended from the previous projection of November 2021 due to the government’s nuclear phase-out policy.

Failure to begin construction to add storage facilities within 100 days would lead to total shutdown of the Wolseong 2, 3 and 4 reactors that each can generate 700 megawatts of power, equivalent to the anticipated capacity of a solar farm that the government plans to build in Saemangeum with an investment of 10 trillion won ($8.09 billion). The Wolseong 1 reactor was already unplugged last year.

The country now has 24 nuclear reactors under operation, accounting for 24 percent of entire power generation.

The Korea Hydro & Nuclear Power (KHNP) plans to add seven Macstor units at Wolseong plant, which would extend its operational period to 2027. But some citizens and environmental activists in Gyeongju are strongly protesting against the construction. They have been holding a sit-in demonstration in front of Gyeongju Station since May 14.

The government that set a goal to reduce dependence on nuclear and fossil fuels has not yet responded to the KHNP’s proposal to expand storage facilities. The spent fuel management reviewing committee will begin to gather opinions from various sectors to determine whether to build more Macstor units.

Labor unions of KHNP, Doosan Heavy Industries & Construction and other five nuclear-related companies held a press briefing on Tuesday to appeal to the opponents and citizens for support. They argued that building more Macstor units would revive the regional economy and protect workers in the nuclear industry. The potential shutdown of the three reactors would severely hurt the economy of Gyeongju and the country as a whole, they added.