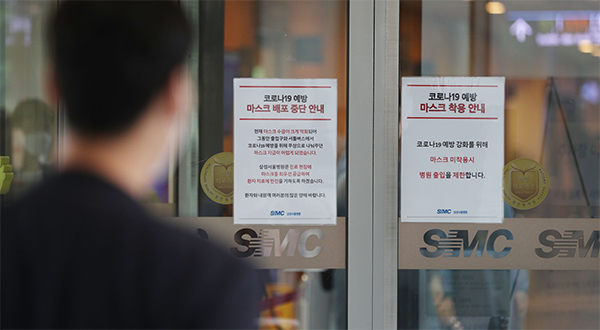 New infection cases spiked to over 30 Wednesday after staying under 15 from Sunday, with medical professionals contracting COVID-19.

Four nurses at Samsung Medical Center, one of the largest medical centers in Seoul, tested positive.

The Seoul City government said Tuesday that a 29-year-old nurse working at the cardiothoracic surgery department was confirmed on Monday and three more nurses who had contact with her the following day. Health officials have been testing 623 people who had been in contact with the nurses.

Seoul City Mayor Park Won-soon said the authorities are conducting a thorough investigation as the situations could get worse given that the infections were found at a large hospital and their infection routes are unclear.

Samsung Medical Center was one of the hot-spot hospitals during the Middle East Respiratory Syndrome (MERS) outbreak in 2015 as 85 out of total 186 cases were reported from the hospital.

Another case was confirmed on Monday at Kangnam General Hospital in Yongin, Gyeonggi Province, which is one of the 250 or more hospitals in the country that have been treating respiratory and non-respiratory patients separately since the COVID-19 outbreak. The infected person is a radiographer and was found to have been in contact with a patient infected at Itaewon clubs.

The hospital has been in a temporary shutdown.

The number of newly confirmed cases of COVID-19 in Korea increased by 32 on Wednesday, the biggest rise in nine days, the Korea Centers for Disease Control and Prevention reported. The number of cases linked to clubs and bars in Itaewon, Seoul, reached 189 as of 6:00 p.m. on Tuesday, with 96 cases were secondary and tertiary infections.

Seniors of high schools returned to school on Wednesday as scheduled after months-long closure due to the outbreak. Schools in Korea will gradually open to other graders by June 8.