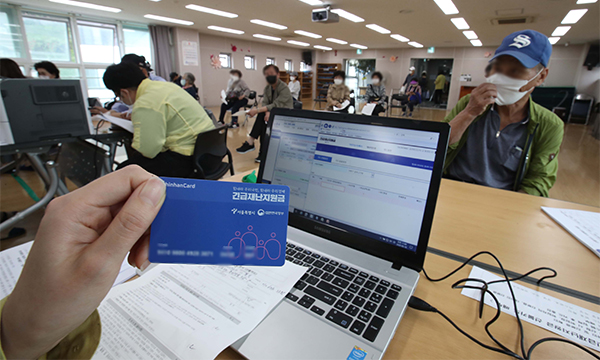 People wait to apply for COVID-19 emergency disaster relief funds at a community center in Geumho-dong, northern Seoul on Monday. It was the first day the government began receiving offline applications for the funds. [Photo by Han Joo-hyung]

Nearly seven out of 10 households have collected disaster grants from the government after South Korea decided to hand out relief aid to every adult citizen for the first time ever in the face of the unprecedented crisis stemming from virus outbreak at home and abroad.

According to the Ministry of Interior and Safety posting on Monday, 65.7 percent of eligible 21.71 million household units collected their share, amounting to 8.91 trillion won, or 63 percent of total budget of 14.25 trillion won ($11.5 billion) in emergency disaster fund.

Of them, 2.86 million households living under basic subsidies, basic pensions, and disability benefits, 99.8 percent or 2.859 million households got cash directly into their bank accounts. Total 1.3 trillion won has been paid out. The remaining 5,243 households were not able to receive payments due to errors such as account cancellation or mistake in account numbers and names. The ministry said funds will be distributed by local governments after correction.

The broader 11.4 million households given aid upon application signed up online last week and received funding through their choice over cash points, credit card charging and gift cards.

The ministry said that 2 million households applied for funds every day during the first week after receiving applications. Funds were allowed to be used for various purposes the very next day. It expected most households to complete registering for funds and payments to be made by this month. Grants that have not been picked up will be considered donation and receive tax deductions at the year-end.

Grocery stores, markets, diners and mom-and-pop stores saw sales double over the weekend after consumers began to spend their relief credits. “Sales have returned to pre-COVID times. Shoppers are buying beef instead of pork,” beamed one grocery shop owner in Gangnam district in Seoul.

Credit card companies have been servicing map on their apps to show where the credit points can be used in nearby areas.

From Monday, district offices have been handing out gift certificate and prepaid cards.

A single household is eligible to pick up 400,000 won cash or cash equivalent and a four-member family maximum 1 million won.