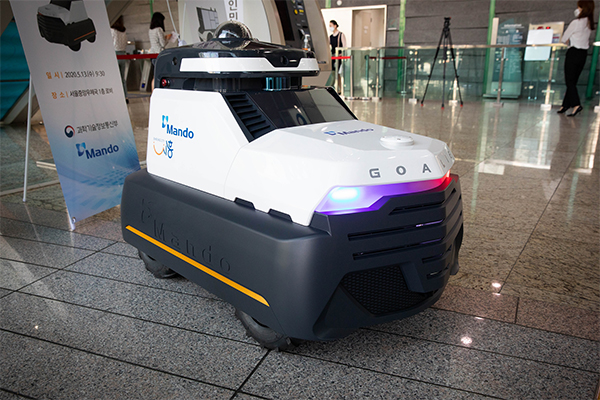 An autonomous vehicle will be deployed to patrol a park in Gyeonggi Province in July after the autonomous robot prototype developed by Korea’s auto parts maker Mando Corp. gained approval for field test in July.

The Ministry of Science and ICT held the ninth ICT regulatory sandbox deliberation committee on Wednesday to approve Mando’s pilot test for its AI robot that will patrol the Baegot Park in Siheung, Gyeonggi Province in July.

The regulatory sandbox is a government policy to ease regulations for companies to allow them to test new services and products in a controlled environment during a designated period of time.

The Goalie, named after an ice hockey position responsible for defending a team’s net by stopping shots of the puck from the opposing team, will patrol around the 661,157 square-meter Baegot Park. The robot is equipped with two laser-based sensors known as LiDAR, a core sensing technology for autonomous driving that calculates the distance and position of objects.

Mando will advance its AI technology by analyzing data sent from Goalie. The robot was developed at Woongok Campus, the company’s new division launched last year to focus on novel technology and business.