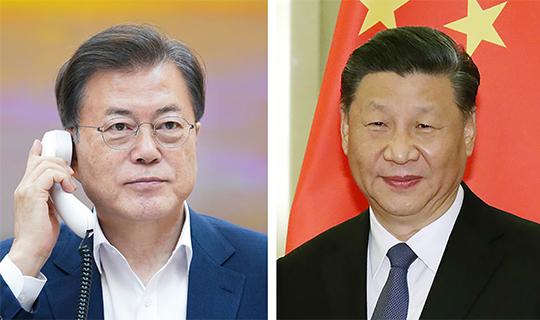 South Korean President Moon Jae-in and Chinese President Xi Jinping congratulated one another on the progress of the virus containment in their respective countries that has led to a fast-track entry arrangement for business visitors since early this month.

During the 34-minute phone conversation initiated by Xi, the two leaders highlighted the expedited entry for business travelers as the starting point of normalization of business activities between the two countries, presidential spokesman Kang Min-seok said Wednesday in a statement.

The last time Moon talked with Xi by phone was in February to discuss their joint response to COVID-19. The latest conversation is the fifth call between the two leaders since Moon came into office in May 2017.

The expedited entry system was implemented on May 1 to ease travel restrictions for business purpose to normalize business and trade activities in the two trade partners. Under the policy, a Korean that tests negative for the virus is exempt from mandatory two-week isolation in China, and vice versa.

Samsung SDI, Samsung Electro-Mechanics, Samsung Display and their subcontractors were the first to benefit from the new program. Some 215 employees from the companies took off for Tianjin, China last Sunday and started work on Wednesday. 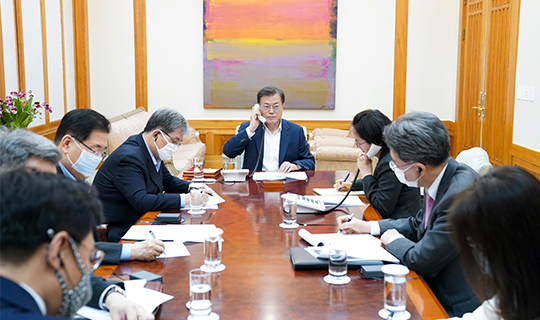 Korea’s success in containing the mass outbreak in late February was celebrated around the world, with many countries taking note of its aggressive testing and contact-tracing. The country was mulling relaxing social distancing measures after seeing the daily infections count hover around 10 in recent weeks. Those hopes were dashed after a new cluster of infections were reported last week involving clubbers in Seoul. As of Wednesday, 120 confirmed cases have been traced to the club venues, with 70 of them in Seoul.

The spokesman added that Xi was still intent on making a return visit to South Korea, though the visit is unlikely to take place in the first half due to the ongoing virus risk.

By Kim Sung-hoon and Kim Hyo-jin