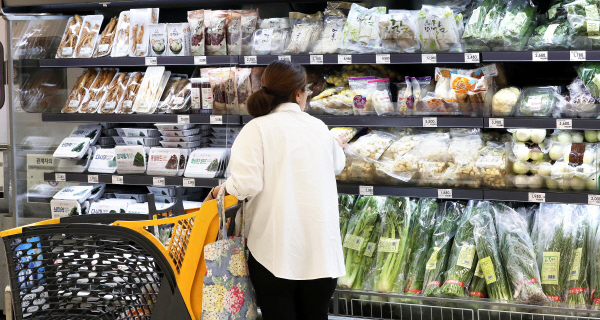 이미지 확대
The share of food supplies against total monthly spending by Korean families fell to the lowest in five years last year to reflect changes in lifestyle, with more preferring to order in or settle for ready-made meals instead of cooking.

Korean households spent 74.9 trillion won ($65 billion) on food supplies and non-alcoholic beverages from January to September last year, up 1.69 percent from the same period last year, according to Bank of Korea’s statistics data on Tuesday. The total household spending or the amount of consumption expenditures made by resident households to meet everyday needs like food, housing, and clothing, grew 2.67 percent to 656.9 trillion won over the same period, in seasonally adjusted nominal terms.

This brought the proportion of Korean households’ spending on food supplies in the entire expenditures to 11.42 percent, which is the lowest in five years for a period spanning from January to September. The figure has been falling continuously after peaking to 11.55 percent in 2017 when fresh food prices spiked due to the heat wave and heavy rain on top of the spread of avian flu, which wrecked poultry industry.

The fall in the share of food supplies spending was mainly driven by a 4.88 percent on-year rise in spending on restaurant/accommodation services, which include dining out and food delivery to home, to 68.6 trillion won in January-September last year.

“Demand for food delivery and dine out has been steadily growing especially among the single-person households,” said Kim Gwang-seok, head researcher at Institute for Korean Economy & Industry. The sales of ready-to-cook meals at big grocery stores also have been rising while more consumers are buying in small quantity rather than getting food supplies in bulk as the number of the single member households are increasing, Kim added.

A study by Hana Institute of Finance, a private economic research center, also showed that households with head of the family aged 39 or younger are spending less on food supplies and more to eat out.