Korea to hand out cash relief to 70% of population, defer social tax duties 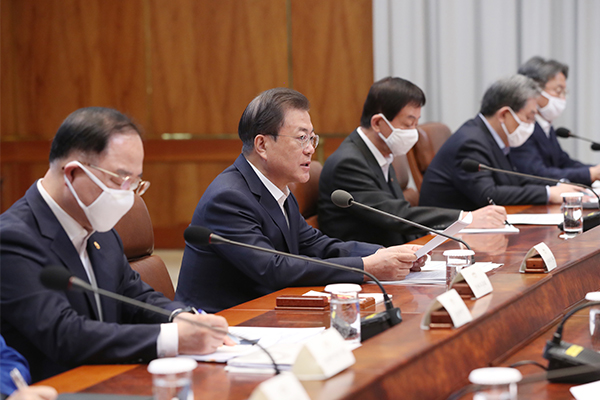 South Korea has joined other governments in handing out cash allowances to more than 14 million low- and middle-income households in its latest relief package to mitigate the economic impact of the coronavirus pandemic.

In the third emergency economic council meeting on Monday, President Moon Jae-in said the emergency aid would go to the bottom 70 percent income earners. A four-person family would receive 1 million ($815), with bigger families to get more and smaller families less.

The latest measure is expected to cost an additional 10 trillion won from the fiscal account. It would be the country’s first-ever cash handout for disaster relief.

Shares that fell nearly 3 percent Monday morning were boosted by the financial aid. The loss in the main Kospi eased to 0.04 percent to close the day at 1,717.12 while the junior Kosdaq rose 3.69 percent to 542.11.

“We don’t know how deep or long the global pains from the COVID-19 will be. The present is difficult and the future uncertain. We must solve immediate difficulties and endure the tunnel,” Moon said.

“Most of the financial aid would be funded through rigorous restructuring of government budget,” he added.

The government plans to seek legislative approval for a second supplementary budget after the April 15 general election. This comes after the 11.7-trillion-won extra spending plan that recently passed parliament.

Moon, in the Monday meeting, also said insurance payments and utility bills would be deferred or reduced for low-income households and small businesses, with the measures to be retroactively applied from March.

The finance ministry will announce a more detailed guideline later in the day.