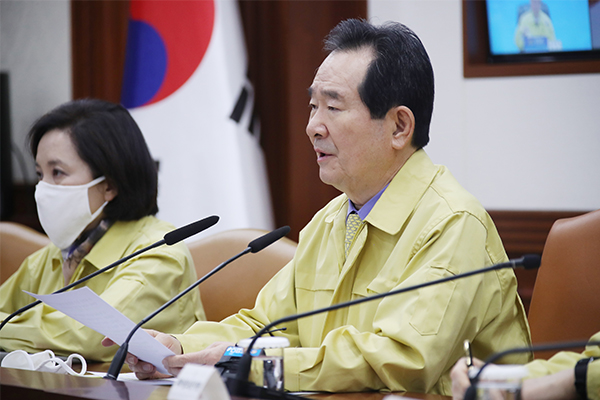 South Korean senior civil officials have joined the austerity campaign as the coronavirus pandemic sparks fears of a recession despite record fiscal spending.

In an emergency workshop held last Saturday, Prime Minister Chung Sye-kyun said ministers and their deputies would yield 30 percent of their monthly salaries through June, equivalent to 10 percent of their annual pay, to combat the coronavirus. The move is likely to have ripple effects on the rest of the government and the broader public sector.

About 140 civil officials from 52 government departments would be joining the campaign, including President Moon Jae-in. The returned pay per individual is expected to be somewhere between 13 million won ($10,000) and 23 million won.

The money would go into state coffers to back relief efforts and other financial aid measures to offset the coronavirus impact, the government said. Korea has already passed an extra budget bill worth 11.7 trillion won, and announced an additional 50-trillion-won rescue package for small businesses and self-employed workers hit hard by the virus.

This is not the first time that state officials have voluntarily slashed their salaries. In December 1997 at the height of the Asian financial crisis, Korea’s prime minister returned 30 percent and other ministers one-fifth of their pay.

The government said it is considering extending the pay cuts further down the ranks, as in previous crisis-hit periods. During the 2008 global financial meltdown, the salaries of all civil servants were frozen for two years from 2009 to 2010.

The measure currently does not apply to state-run agencies but they are likely to follow suit. In March 2009, the Bank of Korea cut the wages of top-level officials, including the governor and monetary policy committee members, by 10 percent until the end of the year.