Electricity bill in South Korea can stretch near $20 bn over 5 years: SNU report 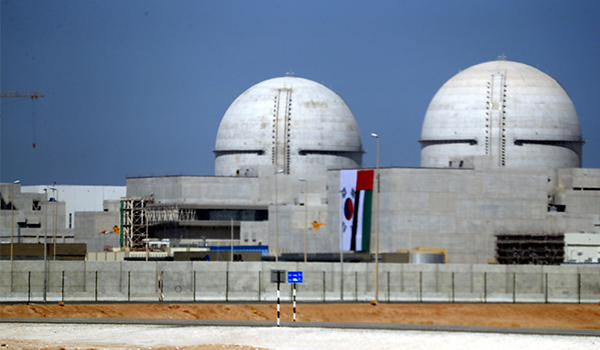 이미지 확대
Electricity bill will stretch 23.4 trillion won ($18.8 billion) in South Korea over the next five years as the result of government’s policy phase out of nuclear fuel that cost the country as much as 180 trillion won in energy expenditure, according to a study by Seoul National University’s nuclear power policy center.

The report showed the unit cost of electricity surging by 23 percent in 2030 and 38 percent in 2040 compared to 2017 based on a simulation of KEPCO’s electric bill increase plan.

This figure is the minimum increase, said Prof. Joo Han-gyu, lead investigator of the study, adding the simulation value is based on the premise that the cost of renewable energy generation will decline at a faster pace than the market forecast due to technology development.

Given the various incidental expenses excluded from the calculation, the figure will increase further, the professor said. In the simulation, only the net cost of electricity generation was calculated as a variable, excluding the on-grid cost for renewable energy and government subsidies. 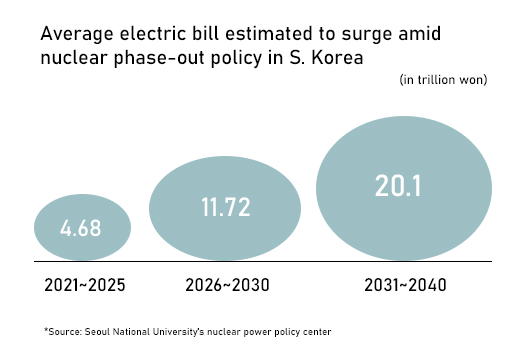 이미지 확대
The report also said that South Korea could lose 180 trillion won from its nuclear phase-out policy by 2040. This outlook is based on forecasts for future supply of renewable energy and includes concrete forecasts for offshore and wind power generation in addition to solar power, the professor explained.

According to its analysis of national energy statistics and KEPCO data, the country will produce a total of 390 GWy for a year when the government’s nuclear phase-out policy continues by 2040, versus 550 GWy when the current nuclear power plants remain intact.

Considering the solar power variable whose unit price will be down from 151 won per kW to 93 won in 2040, the actual difference in economic value could widen to 102 trillion won over the next 20 years.

According to KEPCO statistics, the cost of purchasing nuclear power in January-November last year was 56.40 won per kwh vs LNG’s 120.37 won. Despite this loss of opportunity cost, the government is proudly touting its success in the fight with fine dust.

On Tuesday, the government announced that the amount of particulate matters related to coal power generation was 3,212 tons for three months from December last year, a nearly 40 percent drop from 5,320 tons a year ago. During this period, the government stopped operating 8 to 15 coal power plants and capped the output of power generation to 80 percent in up to 49 plants.

Reducing greenhouse gas and fine dust while downsizing the proportion of nuclear power plants with high cost effectiveness, the cost burden and massive hike in electric bills will be inevitable, Professor Joo pointed out.