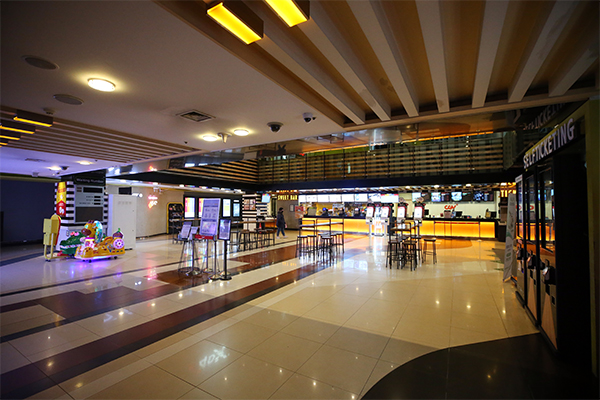 이미지 확대
The South Korean movie community hardly had time to celebrate the Oscar-sweeping feat of “Parasite” as hopes for a renaissance of the Korean cinema from the momentum were quickly dashed by the assault of the new coronvirus (COVID-19) that has put production and release in standstill as few people venture a trip to the theater.

Theater attendance across the nation totaled 7.37 million last month, the lowest in 15 years, and the daily attendance this month fell sharply to around 30,000.

The steep decline in the number of moviegoers is posing a huge threat to the entire value chain from production and distribution to imports, increasing the risk of chain bankruptcies of related businesses. The social distancing campaign that encourages people to avoid group gatherings to contain the virus’ spread has led to deferment in releases of more than 50 Korean and foreign films.

The industry is strongly urging the government to step up its support. The government decided to give a grace period for payment of movie development fund, budgeted cash vouchers for moviegoers and handed out 5,000 bottles of hand sanitizers.

That would be of little relief and the industry asks for more aggressive action such as special subsidies to movies that have been delayed like the Chinese government has done. 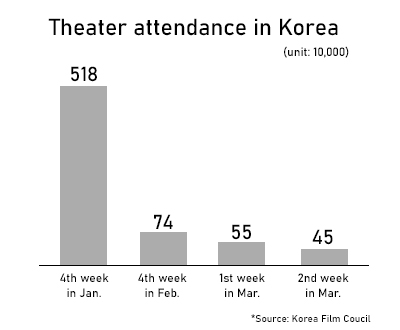 이미지 확대
The country’s multiplex chains have entered an emergency management mode after they once shut down entire screens in Daegu when coronavirus cases surged in the city in the middle of February. Employees of Lotte Cultureworks Co., the operator of Lotte’s multiplex chain Lotte Cinema, voluntarily returned 20 percent of their wage and some applied for unpaid leave.

Some producers and distributors are considering releasing films straight to streaming as many people are turning to streaming platforms such as Netflix and Watcha to entertain themselves at home. According to data from the Korea Film Council, the number of payments for paid content of internet protocol TV (IPTV) services amounted to 3.26 million from the fifth to eighth week this year, soaring 81 percent from the same period last year. The figure was the highest since 2016 when the council began collecting the data.

But the industry experts point out that the content market is not big enough to serve the nation’s 2.5 trillion won worth movie industry. Chung Sang-jin, chairman of Foreign Film Buyer-Distributors Association of Korea, said that theaters are the most critical part of the film industry as box office ticket sales account for 75 percent of entire movie industry. The rapid spread of the virus around the world is expected to make it more difficult to export films due to the theater shutdown in the U.S. and Europe, so the industry should brace for long-term suffering, he added, urging the culture ministry and Korea Film Council to hurriedly come up with support measures.