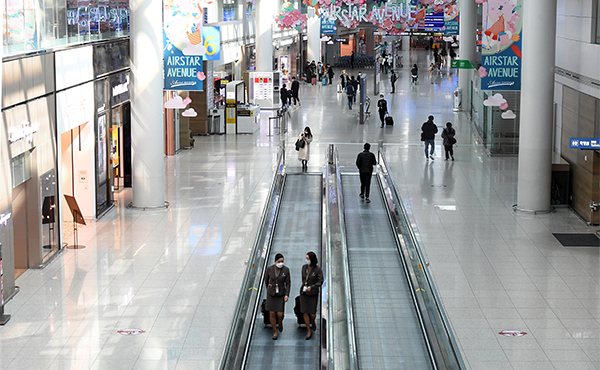 Commercial tenants of South Korea’s gateways to the capital, Incheon International Airport and Gimpo Airport, have collectively asked for rent reliefs as their business has been idled after air traffic remains less than 20 percent of normal levels amid global-wide travel restrictions from virus spread.

Incheon International Airport Corp. (IIAC), the airport operator, and airport tenants on Wednesday began negotiations to adjust their rent terms upon the request of tenants suffering from swelling losses caused by COVID-19 outbreaks. The negotiation will last for three days until Friday, with the airport operator meeting 18 tenant representatives, which include small duty-free shop, restaurants and convenience stores.

They will discuss how to adjust rent terms for concessions in accordance with revenue earned and whether to allow tenants terminate rent contract without penalty.

The negotiation comes as airport shops experience an unprecedentedly challenging business environment, with their outlets nearly empty and sales nosediving due to the coronavirus outbreaks worldwide. As the new epidemic spreads rapidly across the globe, more countries are closing their boarders, dealing a severe blow to the tourism and hospitality industries.

According to IIAC, the number of people entering the country through the airport declined 40 percent in February compared to the same month last year, and outbound passengers down 43 percent.

Industry sources said revenue of food and beverage concessions at Incheon International Airport fell 30 to 50 percent in February compared with a year earlier. Sales loss is expected to be much greater in March, more than halved from a year-ago figure, with more virus-hit countries.

“Rent for an airport shop is high because of the business’s high profitability,” said an industry official. “With sales nearly zero now, the high rent has become a big burden for the tenants.”

The Korean government recently decided to give 25 to 30 percent cut in rent for six months for businesses operating at public facilities. But IIAC limited the rent cut support to small and medium enterprises, although large corporations make up a bulk of concessions at the Incheon International Airport.

“The only response that IIAC has been making to tenants’ request for rent cut was there has been no precedent of lowering rent because of an epidemic,” said an industry official. “There has been a case of the airport lowering rent by 10 percent for a year in 2009 when a novel influenza A (H1N1) virus emerged, but it now says the cut was to offset losses from the global financial crisis, not the disease.”

Korea Duty Free Association recently sent a separate request for rent cut to the airport operator but only two small travel retailers were able to get adjustment while others, including medium-sized operators, failed.