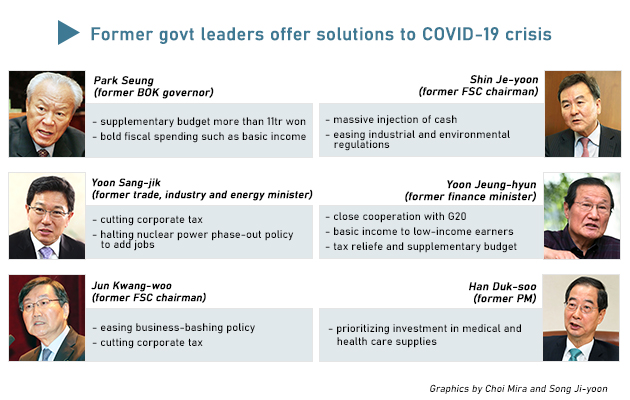 이미지 확대
Former economic and financial chiefs urged Seoul to mobilize “radical” liquidity pumping through available fiscal and monetary means and carry out sweeping deregulations in the face of “Black Swan” event of the novel coronavirus (COVID-19) threatening the Korean and global economy.

Yoon Jeung-hyun, who served as the finance minister in the aftermath of the global financial crisis in 2009, said the top policy priority should be placed on containing the spread of the virus and preemptive measures to normalize the economy as quickly as possible. He suggested the government must learn lessons from the previous experiences when the economy had bottomed out immediately after the severe acute respiratory syndrome (SARS) and the Middle East respiratory syndrome (MERS) outbreaks thanks to drastic fiscal or monetary support programs.

Former Chairman of the Financial Services Commission (FSC) Shin Je-yoon said the government should inject a massive amount of cash to boost consumption, reminding that it was the income compensation policy like refunds for oil price hikes that helped Korea to offset damages from the 2008 global financial crisis.

Regarding the option of handing out cash allowances, Park said that it could be immediate relief but should be restricted to low-income earners and self-employed people. He also strongly recommended temporary tax relief for the airline and travel industries as well as small shop owners who are bearing the brunt of the outbreak.

Veteran policymakers however were worried about the worsening dent in fiscal balance from excessive spending plans. Former trade minister Yoon Sang-jik advised the government increase investment in medical and health care systems, instead of giving out vouchers to people, to prepare the country to better deal with pandemics down the road.

Han Duk-soo, who served as the 38th Prime Minister in 2007 and 2008, also said it is time for the government to set priorities wisely to spend the limited resources, and much of the extra budget should go to medical supplies such as face masks and negative pressure rooms.

Calling the current situation “the unprecedented disaster,” former FSC Chairman Jun Kwang-woo warned the additional interest rate cut would only have a limited impact because liquidity is already abundant in the market. He expressed his worries on the government’s hefty reliance on fiscal spending to cope with the crisis, saying that excessive fiscal policy would worsen the already rapidly increasing debt-to-GDP ratio and pass the burden down to the next generations.

The biggest problem right now is that people don’t spend money due to the fears, so the government should encourage spending by easing labor-related regulations and cutting corporate tax.

Trade minister Yoon agreed with the idea, criticizing that the government’s pro-labor and anti-corporate policies have long been restraining business activities so that it now has to ease the policies to revitalize corporate activities.