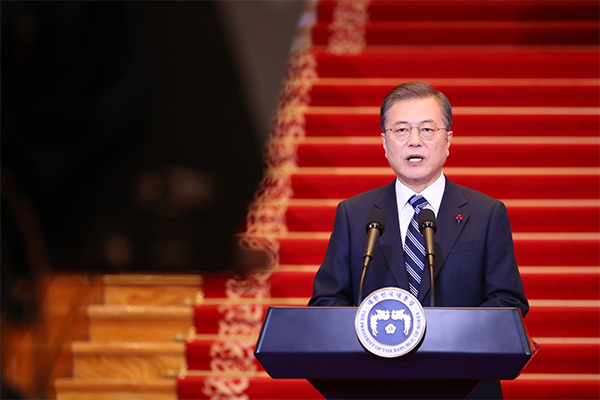 South Korean President Moon Jae-in warned North Korean leader Kim Jong-un that his return to military provocations would “help no one” and offered him yet another invite to Seoul for a breakthrough in the stalled nuclear talks.

“It has become more urgent than ever to find practical ways that would pave the way for inter-Korean cooperation and successful talks between the United States and North Korea,” Moon said in his televised New Year’s address on Tuesday.

He warned that North Korea’s saber rattling and military threats “benefit no one,” and urged the country to come back to diplomacy and negotiations.

"I am willing to meet and hold as many talks as it takes,” he said. “The two Koreas need to work together in building the mood for Kim’s reciprocal visit to South Korea at an early date."

Moon suggested taking efforts to enlist the Demilitarized Zone (DMZ), a buffer zone that runs along the border of the two Koreas, on the UNESCO World Heritage List.

“The DMZ is a place of great ecological and historical significance that also embodies inter-Korean peace and reconciliation,” he said.

This is a step the two Koreas can take immediately, Moon said, and urged a positive response from the North.

Moon acknowledged that the year-long nuclear talks between Washington and Pyongyang have “failed to make much progress.” Despite two summit meetings between Kim and U.S. President Donald Trump, negotiations on denuclearization have stalled due to disagreement over the terms of sanctions relief. The U.S. agreed to lift all sanctions on full disarmament. The North favored a more piecemeal deal and said it would dismantle its main nuclear site in return for relief from the most crippling sanctions.

After the collapse of the second North Korea-U.S. summit in February 2019, North Korea reverted back to belligerence, conducting as many as 13 rounds of short-range ballistic missile and rocket artillery tests last year.

Tensions escalated further when Kim last week announced his country would no longer be bound to the self-imposed moratorium on testing nuclear weapons and long-range ballistic missiles, and threatened to show off a new strategic weapon “in the near future.”