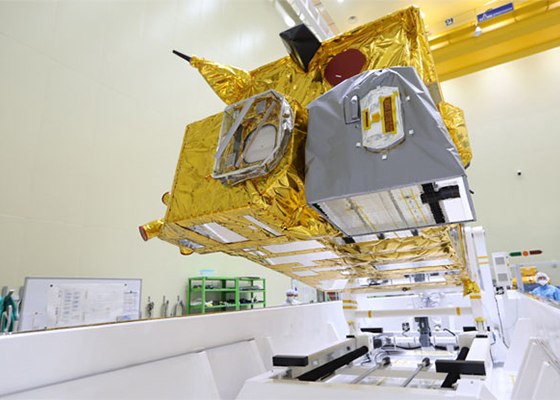 The Cheollian Satellite 2B. [Photo by the Ministry of Science and ICT]

South Korea next month will launch a new geostationary earth orbit satellite that would track air pollutants and ocean environment in real time, hoping to aid the worsening air pollution in East Asia.

The Cheollian Satellite 2B is scheduled to launch into orbit aboard the French Ariane 5 rocket at the European Space Agency rocket launch site in Kourou, French Guiana, an overseas region of France on the northeast coast of South America, at 7:14 p.m. Feb. 18 (local time), the Ministry of Science and ICT on Sunday.

The exact launch schedule could change depending on local weather conditions, said Korea Aerospace Research Institute (KARI), the primary developer of the satellite.

If launched successfully, the Cheollian Satellite 2B would spend about a month spiraling up into higher orbit before resting at a geostationary orbit at an altitude of 36,000 kilometers from earth.

“We will spend the first few months testing out the satellite operations,” said the Ministry of Science and ICT. “The monitoring of the marine environment including red and green tides can start in October. Tracking of air pollutants such as fine dust and ozone would be possible from 2021.”

There are notable improvements from Cheollian Satellite 1. The life cycle of the new satellite is 10 years, longer than its predecessor by three years. Its spatial resolution is four times better, powerful enough to differentiate two objects placed 250 meters apart. Data processing speed is also more than 18 times faster at 115 megabits per second.

The enhanced new satellite would be able to monitor in real time the various movements related to the marine environment, including harmful algal blooms, melting of sea ice and oil spills, as well as the movements of more than 20 different air pollutants, KARI said. This is expected to significantly raise the accuracy of air pollution forecasts and help set up effective environmental policies compared with relying on just on-the-ground observation data.

The Cheollian Satellite 2B would cover a vast region spanning 13 countries in East Asia, from Japan to northern Indonesia to southern Mongolia. Korea said the data would be of invaluable use in understanding the effects of transboundary air pollution, especially China’s contribution to the air quality trends in neighboring countries. According to a joint research released by Korea, China and Japan in November 2019, China is responsible for around 32 percent of ultrafine dust in Korea.

By Song Kyung-eun and Kim Hyo-jin