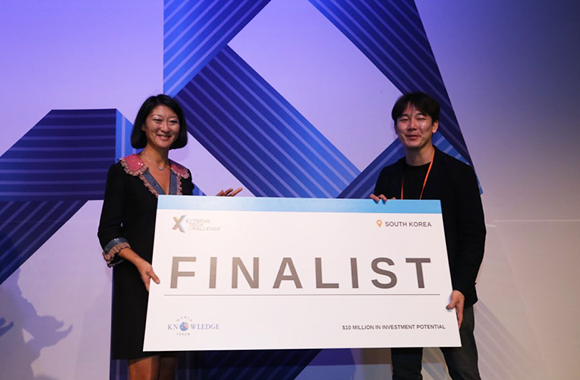 Fleur Pellerin, left, Founder and CEO of Korelya Capital, and Kim Hyoungmin, Founder and CEO of H LAB, hold a sign board that certifies Kim won a ticket to a final round of XTC in the ASEAN Scale-Up Session, held at the 20th World Knowledge Forum at Shill Hotel in Seoul on Sep. 27, 2019.

Any startups that can help address U.N. SDGs such as energy, food, climate change can apply for XTC. The deadline is due March 31, 2020.

Top 30+ startups will be invited to Paris to participate in a finals round bootcamp. Finals bootcamp will provide world-class mentorship and training as well as connect startups with leading corporations and venture capitalists.

In June, top 10 startups can pitch on stage at VivaTech, the largest startup forum in Europe, Paris to an audience of thousands. Three out of 10 startups will be the announced at VivaTech on June 11~13, 2020. They will have opportunities to raise $10 million, have startup gurus’ mentorship and global exposure. The XTC was originally launched in 2014. It was upgraded into the version 2.0 with a focus on SDGs last year.

Maekyung Media Group signed the partnership with XTC because it shared the philosophy that technology must be developed and used for common prosperity of humans. The philosophy is consistent with ‘Knowledge Revolution 5.0’, the topic of the 20th World Knowledge Forum, hosted by Maekyung Media Group, in Seoul on Sep. 16~18, 2019. Knowledge Revolution 5.0 stressed so-called inclusive technology for all humans in order to prevent side effects such as tech cold war that can arise from the advancement of technology led by the 4th Industrial Revolution.

More information about XTC can be found at https://extremetechchallenge.org/.