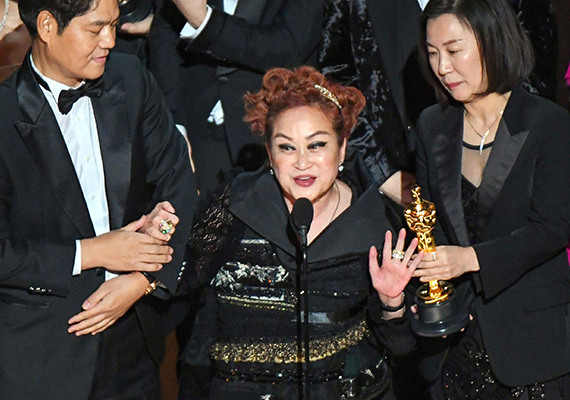 Lee Mi-kyung, Vice Chairwoman of CJ Group, delivers an acceptance speech for Best Picture for “Parasite” during the 92nd Oscars in Hollywood on Feb. 9, 2020. [Photo provided by AFP-Yonhap]

Parasite made Oscar history by becoming the first foreign-language film to win best picture through its witty satire on the conflict between the haves and the have-nots. But ironically, without the funding of the super-rich, the movie may not have reached so far on Oscar night.

Parasite picked up four awards at the 92nd Academy Awards, including best international feature, best director and best original screenplay. As the entire Korean crew went up to claim the top prize, the last to speak was a small woman, who slowly made her way to the podium amid thundering applause.

Lee Mi-kyung, Parasite’s executive producer who also goes by her English name Miky Lee, praised Bong Joon-ho, saying she liked everything about him especially his sense of humor. She thanked everyone who “supported Parasite, those who worked with them, and those who loved them” and especially the hard-to-please moviegoers in Korea that helped the local movie industry to “never be complacent.”

She also paid tribute to her brother, CJ Group Chairman Lee Jae-hyun, “for allowing us to dream, even if it’s an impossible dream.” 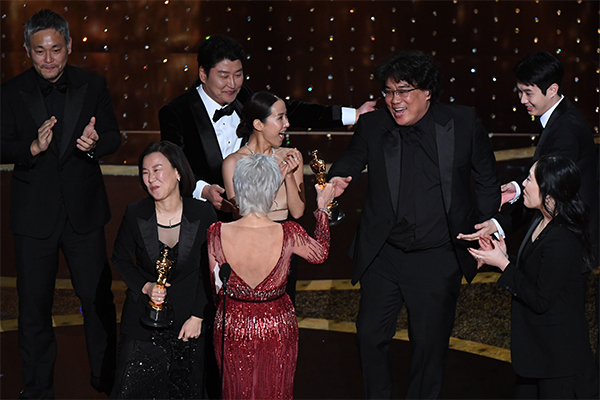 Although she had kept a low profile, her name came up repeatedly following investigations of the now-impeached President Park Geun-hye in 2017 amid rumors that she was forced to go into exile in the United States after she was blacklisted for airing a satire of Park on CJ’s cable TV channel. Her brother spent a jail term under the Park administration on charges of embezzlement and tax evasion.

That actually had been a boon for Lee and her dream to make Korean cinema big in the U.S. as she used the time mostly to build her connections in Hollywood.

CJ Group was spun off from Samsung in 1996, and now spans a broad array of businesses ranging from food and logistics to entertainment and cinema.

Lee and her brother first jumped into the film industry in 1995 and have since backed some of Korea’s biggest movies. Lee’s first relationship with Bong started with his movie, Memories of Murder, in 2003. She again joined hands with the director in 2009 for his drama film Mother, and flew over to Cannes to personally promote the movie when it competed in the Un Certain Regard category at the Cannes Film Festival.

이미지 확대
CJ was also the main financial backer of Bong’s first English-language film Snowpiercer in 2013. The science action film set on a futuristic train starred some of Hollywood’s biggest names including Chris Evans and Tilda Swinton. When most investors balked at the $40 million budget, CJ agreed to shoulder all production costs. The movie, which was the most expensive Korean production at the time, was a critical and commercial success, and helped catapult Bong’s name to worldwide fame.

Lee Mi-kyung is said to have leveraged her years of experience in the U.S. entertainment world and tapped into her broad personal network to make Parasite a word-of-mouth hit among opinion leaders.

The movie first hit U.S. theaters last October through a limited release in three screens, which quickly expanded to 1,060. As of Feb. 8, the film has grossed $34.37 million in the U.S. and Canada, making it the sixth highest-grossing film in North America for a foreign-language film.