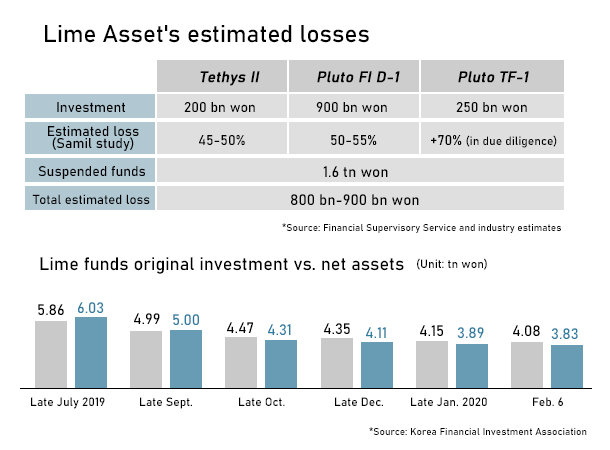 이미지 확대
Individual investors may not be able to redeem a cent if funds sold by Korea’s troubled hedge fund Lime Asset Management Co. post a loss ratio of near 60 percent, an outside auditor warned.

The outstanding assets of three Lime funds that have suspended withdrawals - Tethys II, Pluto FI D-1, Pluto TF-1 – were estimated at 1.6 trillion won ($1.35 billion), with investor losses to reach 800 billion to 900 billion won, according to a due diligence report by audit firm Samil PricewaterhouseCoopers.

The loss rate for Tethys II and Pluto F1 D-1, which invested in privately placed securities and mezzanine funds, is reported to be 45-50 percent and 50-55 percent, respectively. While not yet confirmed, the loss is expected to be bigger for Pluto TF-1, which invested in trade finance funds, at more than 70 percent.

Korea’s largest hedge fund came under fire last October when it halted withdrawals from the three funds after investors rushed to take their money out following news of a regulatory probe into the company’s risky trading activities. The company was suspected of illegally trading convertible bonds of listed firms with non-listed companies in collusion with large-sized brokerage houses to increase returns.

To enjoy leverage, Lime had also managed the funds under a total return swap (TRS) contract with local brokerages, with the hedge fund paying commissions to financial institutions that would buy the assets on its behalf. 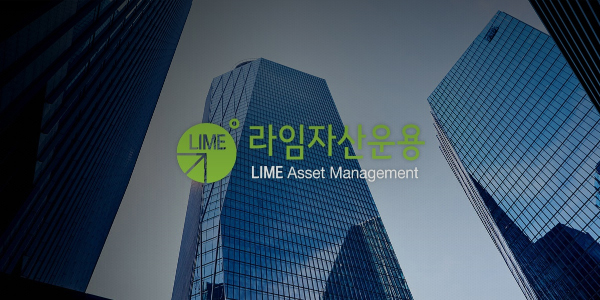 이미지 확대
These firms have the right to first payment in liquidation, meaning less would be left to go around for retail investors. Out of the estimated recouped assets of 800 billion won, 670 billion won would go to the brokerages, leaving individual investors with just 130 billion won.

“The financial institutions would start to incur losses when the fund loss rate exceeds 58 percent,” said one industry expert. “What’s more troubling is that after this point, individuals won’t be able to reclaim a single penny, which is likely to spark legal actions from investors that lose hundreds of millions of dollars.”

The number of retail investors affected is more than 4,000, with the average investment per person around 200 million won.

Lime’s total assets are also dropping sharply, making the investment recovery more difficult for individuals even if they take the case to court.

According to Korea Financial Investment Association, Lime’s net assets of 269 funds under management totaled 3.83 trillion won as of Feb. 6, with the suspended funds making up nearly 40 percent. Net assets are 2.2 trillion won lower compared with late July 2019 when allegations first started to emerge of its unfair trading practices. They are also 257.7 billion lower than the original investment amount of 4.09 trillion won.

On Friday, the Financial Supervisory Service is expected to announce its on-site investigation results and give a more detailed report on Lime’s fund losses. The Financial Services Commission will also issue a new guideline for private equity funds.