이미지 확대
South Korea and Australia extended their existing currency swap deal by another three years and raised the ceiling in funding for the event of an emergency to 12 billion Australian dollars from previous 10 billion dollars.

The renewed pact will stay effective until Feb. 5, 2023. The existing currency swap deal was due to expire on Friday. 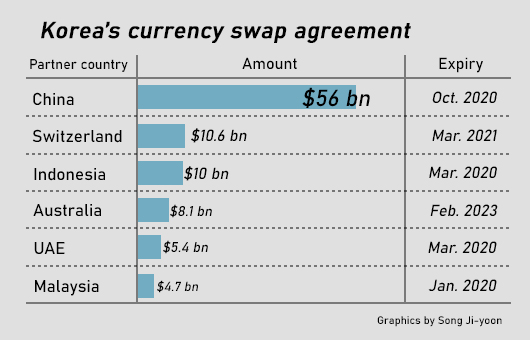 이미지 확대
A currency swap agreement enables countries to provide each other with liquidity in times of a crisis.

The two countries initially signed a currency swap agreement in 2014 and have renewed it three times.

“This agreement is designed to promote bilateral trade for the economic development of the two countries, to enhance financial stability and for other, mutually agreed, purposes. The agreement will ensure that trade between the two countries can continue to be settled in local currency even in times of financial stress,” BOK said in a statement.