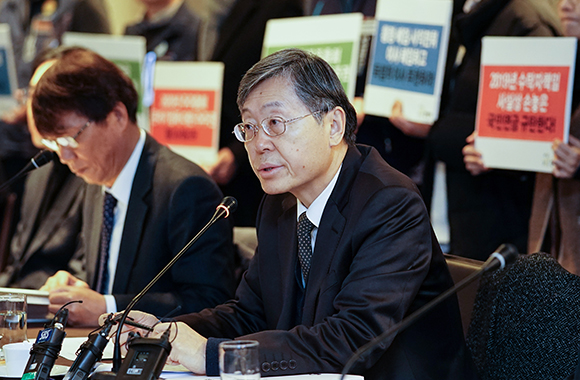 South Korea’s largest institutional investor National Pension Service (NPS) is unlikely to roll out its platform of greater shareholder activism in time for the March proxy season due to delayed internal preparations.

“We’re still in the process of setting up the new subcommittees,” Cho Heung-seek, vice president of the NPS Fund Management Committee told reporters Wednesday, adding that the preparations might not be ready by the March meetings.

The world’s third-largest pension fund was given the state get-go last month to form three nine-member subcommittees under the Fund Management Committee, the fund’s highest decision-making body, which would be devoted to overseeing the fund’s shareholder engagement activities. The subcommittee is said to consist of three standing members and six outside experts, but the fund has yet to finalize the appointment for the group.

Last December, NPS announced a set of guidelines outlining the scope of engagement activities it can take to push for better corporate governance. This spelled out a much greater shareholder role for the fund, allowing it to demand the ouster of certain board members or changes in corporate articles of companies whose value has been harmed by crimes such as embezzlement, abuse of power or breach of duty.

Expectations have been high for the NPS to wield this increased clout at the upcoming shareholder meeting of Hanjin Kal Corp., the holding company of the country’s biggest flag carrier Korean Air Lines Co.

이미지 확대
The company’s Mar. 24 meeting is seen as a critical moment for the incumbent chief Cho Won-tae as he is up for re-election as chairman of the board. He is in a proxy fight with his older sister Cho Hyun-ah, who has teamed up with other big shareholders, including the No. 2 shareholder and activist fund Korea Corporate Governance Improvement (KCGI), to unseat her brother and name a professional manager instead.

The family feud took another twist this week after Cho Won-tae won the backing from his mother and younger sister, who both own sizable stakes in Hanjin Kal. The two siblings are now neck-and-neck in proxy votes, making NPS’s 3.45 percent stake more crucial than ever.

Hanjin Kal would be accepting shareholder proposals regarding dividends, dismissal of board members and other important management decisions by Feb. 10, six weeks before the annual meeting. But as NPS has yet to round up its subcommittees, it is unlikely to submit the proposals in time. Eyes are now on how the fund will exercise its casting vote in March.