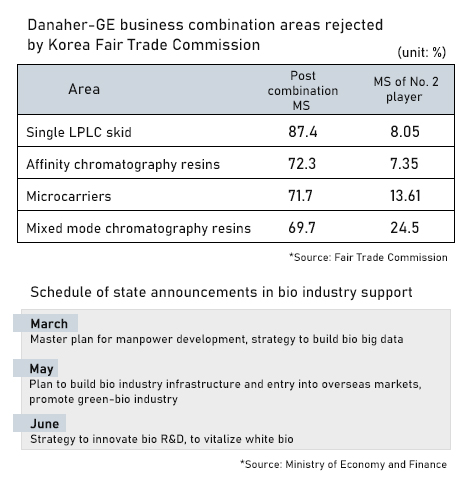 The Korea Fair Trade Commission said a total of 32 bioprocessing products are overlapped in their current business areas and combining eight of these are not allowed, adding potential price hikes and monopoly concerns after the merger in Korea.

The KFTC’s latest decision is in sync with the European Commission. The U.S. medical equipment maker Danaher received conditional EU approval in December for the $21.4 billion business combination deal after agreeing to sell five businesses to third parties. It is also in line with the government’s policy to support the nascent bio industry designated as one of the country’s future growth engines.

Danaher is a U.S. biotech company that operates businesses in life science, diagnostics, water treatment, and dentistry. It is also the world`s second largest manufacturer of dental implants.

Danaher filed for an antitrust review with the KFTC last May.