Korean auto, steel sectors to benefit most from RCEP with ASEAN 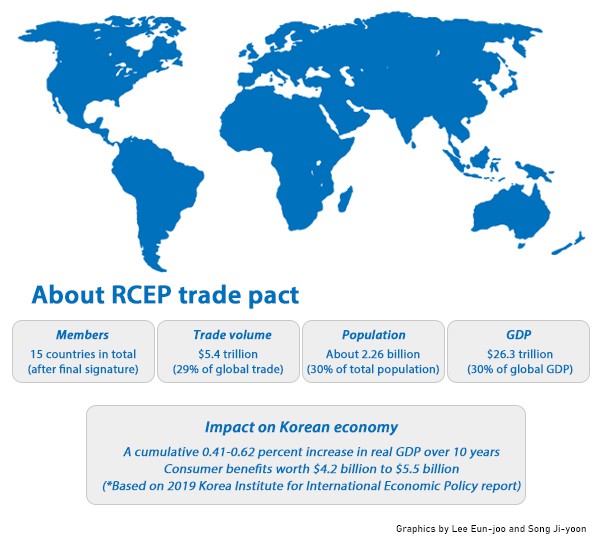 이미지 확대
South Korean auto and steel sectors are expected to benefit the most from the Regional Comprehensive Economic Partnership (RCEP) trade pact signed on Sunday by Korea and 14 other Asia-Pacific countries that cover nearly 30 percent of the global economy.

On Sunday, 15 countries – 10 Association of Southeast Asian Nations (ASEAN) member countries, Korea, China, Japan, Australia, and New Zealand – signed on the world’s largest trading bloc under the RCEP trade pact. The RCEP pact, which is expected to go into effect from the latter half of next year at the earliest, is subject to parliamentary ratification from each country. In Korea, the trade agreement needs to receive presidential approval before going through ratification procedure at the National Assembly.

Once the mega trade pact takes effect, Korea’s auto and steel sectors are expected to enjoy benefits the most from the agreement that covers 30 percent of the world’s economy and 2.2 billion of the world’s population.

Under the trade deal, Korea has successfully lowered trade barriers for its mainstay export items such as automobiles and steel in ASEAN market. Trucks and passenger cars are currently subject to over 40 percent and 30 percent tariffs in the ASEAN market but the trade pact will allow the rates to be reduced gradually to zero. Automobile components such as car engines, safety belts, and air bags that are subject to 10 to 30 percent tariffs in ASEAN will also face sharply lower tariffs.

But at the same time, Korean automobile and auto components manufacturers would face fiercer competition with Chinese and Japanese rivals that could offer similar quality products to win new customers under the pact.

Steel products are other main items that would benefit from the trade pact as lower tariff barriers would allow them reach out bigger markets not only in ASEAN countries but also in Japan Japanese markets. The 20 percent tariffs on steel pipes will be eliminated as well as restrictions on steel sheets, steel bars, and shape steels. 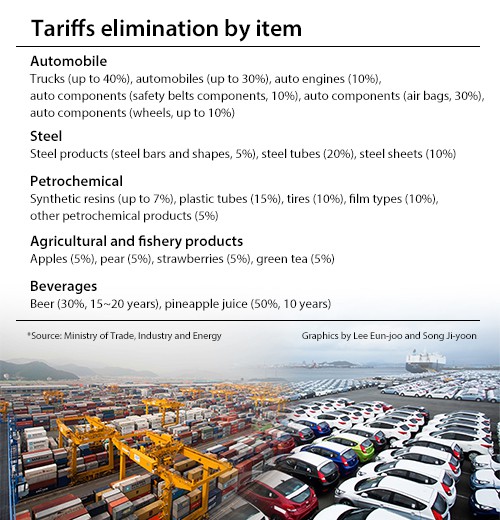 The latest RCEP agreement also allows Korea to trade with Japan under their first-ever free trade deal, meaning that Korea are now in FTA with all of the world’s top five economies – the United States, China, Japan, Germany, and India.

Under the RCEP, Korea and Japan will remove tariffs on 83 percent export items from each country. By import volume, Japan will lower tariffs on 78 percent of their products, two percentage points more than that of Korea, while Korea will apply a nonlinear or gradual tariff elimination scheme over 10 to 20 years on open items to minimize damage on local industries.

In the agricultural sector that has voiced the strongest opposition to every FTA deal Korea has engaged, Korea has managed to avoid an immediate shock to the country’s farming. Under the RCEP, tariffs on tropical fruit imports will be eliminated but Korea will maintain tariffs on main crop imports such as rice, garlic, and onion as well as on fishery products sea bream and scallops.

Still, the Korean government needs to seek for measures to protect local farmers and fishermen from the import of tropical fruits and fishery products because some foreign food items will have immediate benefit of zero tariffs once the pact is ratified. Import tariffs will be immediately eliminated on four items – including cheddar cheese and kiwis – from ASEAN countries while those of tropical fruits including guava, durian, mangosteen, and papaya will be removed after 10 years.

The latest deal has also lowered exports tariffs of Korean alcohol drinks such as soju and makgeolli to Japan and eliminated tariffs on dried seaweed to ASEAN bloc.