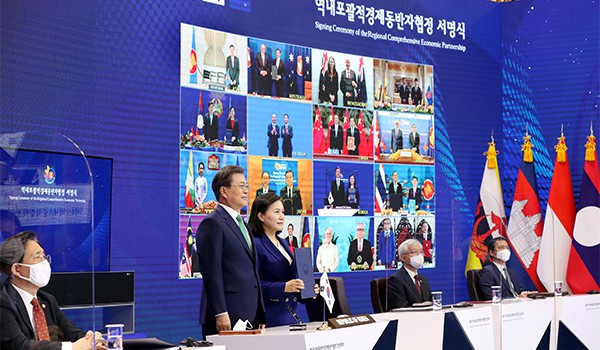 South Korea’s access to the world’s largest free trade bloc is expected to boost long-term economic growth by up to 0.62 percent and strengthen its trade competitiveness by building on its existing bilateral trade arrangements with 60 countries.

Korea joined 14 other Asia-Pacific economies to form the Regional Comprehensive Economic Partnership (RCEP), which was formally approved at the end of a four-day Association of Southeast Asian Nations (ASEAN) summit in Hanoi on Sunday.

The pact, which took more than eight years of negotiations, needs ratification from at least six ASEAN members and three non-ASEAN countries to become effective. While it excludes India, the world’s second-most populous nation, RCEP still accounts for 30 percent of the global economy and 2.2 billion of the world’s population.

“The world’s largest free trade agreement will take off with the young and dynamic ASEAN at the center to address multiple challenges including the Covid-19 pandemic, the spread of protectionism and threat to multilateralism,” said South Korean President Moon Jae-in. “RCEP will overcome borders and contribute to restoring multilateralism and the free trade order.”

Korea also is readying to join the U.S.-led Comprehensive and Progressive Agreement for Trans-Pacific Partnership (CPTPP), which is likely to gain momentum under the Joe Biden presidency.

The Institute for International Economic Policy forecast the new trade deal to expand the Korean economy by 0.41 to 0.62 percent in the long-term. If the India-excluded pact achieves 92 percent tariff liberalization, Korea’s real gross domestic product is expected to grow 0.51 percent and create $5.5 billion in consumer welfare gains over a 10-year period, the study showed.