Korea’s mobile internet speed is 3.4 times faster than the world average of 35.96 Mbps. Its speed also has become 10 percent faster in September compared to a month earlier.

It is the second month in a row for Korea to top the index. Norway had boasted the world’s fastest internet speed until early this year but Korea jumped to the top place in May from sixth place in March.

Following Korea was China with an average download speed of 113.35 Mbps. The third was the United Arab Emirates with 109.43 Mbps. 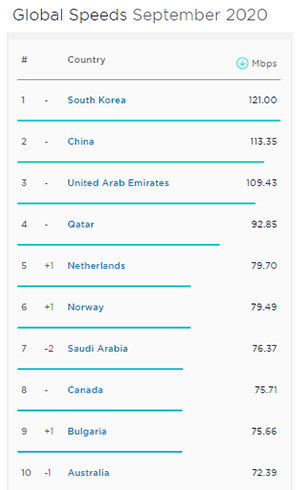 Separately, Korea’s leading wireless carrier SK Telecom was named world’s second fastest mobile network in Ookla’s Speedtest assessment for the second and third quarter of 2020. The top was Etisalat of the U.A.E.

SK Telecom was the only Korean mobile carrier to make the top 10.

Korea which was the first in the world to commercialize 5G network service has the quality of internet service also improved by cleverly choosing medium bandwidth for wide coverage, said an industry expert.