이미지 확대
South Korean population will fall below the 50 million threshold two years later, and the economic active number will barely make up half of the population 20 years later, according to the estimate by the statistics office.

According to Statistics Korea’s 2017-2040 population outlook, South Korean population will start thinning next year. The country’s population that stands at 50.051 million this year is projected to dip below the 50 million mark in 2022 at 49.997 million after declining to 50.029 million next year. The population is expected to reach 48.576 million by 2040.

The data was compiled for the first time by the agency to derive population outlook by policy subject such as pension and welfare, foreigners, and multi-cultural families.

The country’s pitiful birthrate is behind population thinning.

Korea’s total fertility rate – which measures the number of babies a woman is forecast to have during her lifetime – dropped to a historic low of 0.84 in the second quarter. Korea has also seen a decline in natural population since March, in which the number of deaths outnumbers that of births. 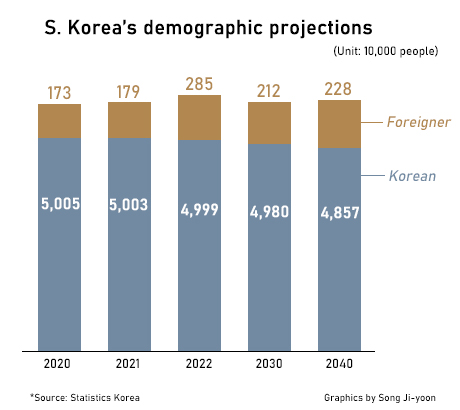 Amid population decline, the number of foreign population is expected to surge from 1.73 million this year – 3.3 percent of total population – to 2.28 million in 2040 – 4.5 percent.