South Korea to legalize all abortions within 14-week term 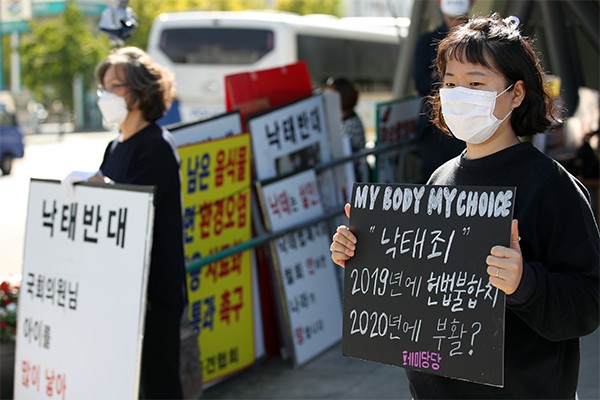 이미지 확대
Surgical abortion within 14-week term is to become unconditionally legalized in South Korea and those under the legal adult age can choose to end pregnancy without the consent of parents.

The Ministry of Justice, Ministry of Health and Welfare and Ministry of Food and Drug Safety jointly announcement amendments to the Criminal Act and the Mother and Chile Health Act to legalize abortions up to 14 weeks in line with a milestone Constitutional Court ruling in April last year.

The court said banning abortion is unconstitutional and violates women’s rights to make their own decision and set “14 weeks of pregnancy” as a threshold in which women’s rights to choose precedes the fetus’ right to be born. It gave the government until the end of this year to make revision to the law.

Currently, abortion is legal only in case of rape or incest or if the mother or father has a genetic disorder. But under the revision, women will be allowed to terminate their pregnancy between 15 weeks and 24 weeks of gestation for social and economic reasons if they go through consultation at designated facilities and 24-hour of consideration period.

The clause that required a woman to get content from a partner was removed due to criticism on violation of women’s rights.

Minorities aged under 16 who don’t have a legal representative or can’t receive parental consent will also be allowed to end pregnancy after mandatory counseling. The government also plans to legalize a medication abortion, which refers to the use of pills to terminate early pregnancy. The medication abortion is legal in 75 countries.

The revision plan, however, fails to satisfy both pro-choice and pro-life supporters.

On Wednesday, 174 female professors released a joint statement saying that they strongly oppose the plan. “Given that most abortions are performed during the first 12 weeks of pregnancy, the revision effectively allows abortion of every stage of pregnancy,” they said.

On the other hand, the ruling Democratic Party lawmaker Kwon In-sook condemned the plan as “historical retrogression,” arguing that it revives punishment on abortion that was already ruled illegal by the Constitutional Court.

S. Korea to nearly triple the size of green biotech industry by 2030