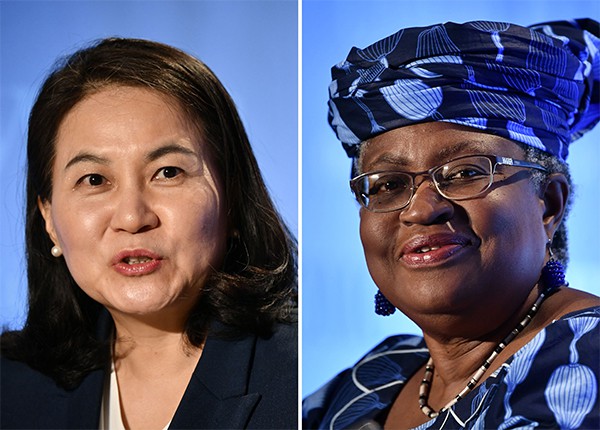 Yoo Myung-hee, South Korea’s trade minister hoping to become the first Korean and female director general at the World Trade Organization (WTO), has advanced to the final round in the race to lead the trade body, media sources said on Wednesday.

WTO members selected two final candidates – Nigeria’s Ngozi Okonjo-Iweala and Korea’s Yoo – to make it to the final round in the race to lead the Geneva-based trade body, Bloomberg reported on Wednesday, local time, citing people familiar with the matter.

WTO plans to officially announce the results of the two final candidates to the delegates on Thursday morning in Geneva.

With two women in the shortlist, the WTO is set to go under the first female chief in its 25-year history. If Yoo is selected, she will also make the first Korean to head the global body.

Kim Chul-su, Korea’s former minister of trade, industry and energy, bid for the job in 1995 and Bark Tae-ho, former trade minister in 2013, but both failed.

Yoo traveled Switzerland, the United States, France, and Sweden, and met with ambassadors of each country and key officials at WTO to campaign. Yoo emphasized she is a qualified candidate as she has walked a single path as a trade expert.

President Moon Jae-in backed her by seeking supports in his meeting with state heads.

The race won’t be easy as Okonjo-Iweala is a strong, high-profile candidate. She served as Nigeria’s finance minister and foreign affairs minister and has experience working at the World Bank as former managing director.

The third and final phase of the consultation process will take place later this month until November 6 before WTO names the winner before November 7, Bloomberg said.

In the final round, 164 member countries will be allowed to give preference of only one candidate.