According to the 2019 second-half income reports received by the National Tax Service, 330 individuals made a total of 18.5 billion won from YouTube. This amounts to an average monthly income of 9.34 million won or annual income of 112 million won.

This is the first registered government data on YouTube income after the National Tax Service added YouTube as a taxable income source in September 2019.

The YouTubers said they earned 7.35 billion won from Google in the form of ad revenue, which made up roughly 40 percent of their total earnings. YouTubers can make money by placing ads in their videos if they have more than 1,000 subscribers and 4,000 valid public watch hours in the last 12 months.

The dominant 60 percent of their income came from paid product placements. This generated 5.62 million won a month for the YouTubers, about 1.91 million won more compared with what they earned from YouTube ads. 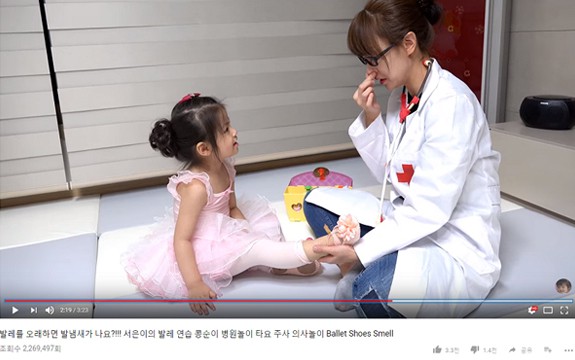 According to industry estimates, the highest-paid YouTuber in Korea is a 6-year-old girl named Seoeun, who makes about 8.5 billion won a year on her channel “SeoeunStory,” which has 7.51 million followers.

YouTubers have so far avoided paying taxes due to regulatory loopholes. YouTube ad revenue is wired directly to individual accounts by Google, whose headquarters are in the U.S. Under Korean laws, overseas financial transactions can go unreported if their cumulative amount does not exceed $10,000 a year. As Google does not perform a self-verification check on the accounts, the money can also be received in borrowed-name accounts.

The National Tax Service has set out to database not only foreign transactions exceeding $10,000 but also separate cases that run over $1,000 per transaction to prevent tax evasion in the form of splitting money transfers.

One-person media channels are growing in popularity and becoming a highly lucrative business, raising the need to bring them under the current tax framework.

As of August, as many as 4,379 YouTubers in Korea had channels with more than 100,000 subscribers. Some 2,387 individuals had also reported themselves as media content creators at the National Tax Service.

By Hong Sung-yong and Kim Hyo-jin