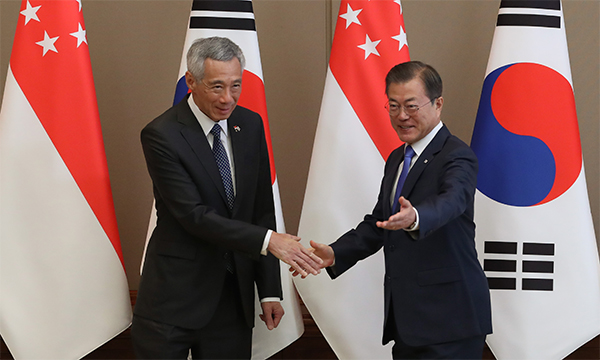 Leaders from nine Association of Southeast Asian Nations (ASEAN) members and over 14,000 guests gathered in Busan, a southern port city of South Korea, for a regional summit and conference to cement ties.

Cambodian Prime Minister Hun Sen had to abruptly cancel the trip because of his mother-in-law’s health issues.

The special summit meeting was arranged to commemorate the 30th year anniversary of relations between Korea and ASEAN. This is Korea’s third time to play host to the regional summit after the 2009 meeting in Jeju Island and the meeting in Busan in 2014.

Korea’s trade with Southeast Asia has been growing at a steady clip, averaging 5 percent growth every year. Korean President Moon Jae-in vowed to expand the bilateral trade volume to $200 billion by 2020, a size that would rival that with China.

Moon plans to hold a series of meetings with ASEAN leaders on the sidelines of the event. He has already met with Singaporean Prime Minister Lee Hsien Loong and Brunei`s Sultan Hassanal Bolkiah over the weekend.

Singapore, in particular, struck an agreement with Korea to expand the number of flights between the two countries.

The agreement, which comes into effect Tuesday, would scrap the current rule that limits Korean and Singaporean carriers each to 49 flights a week to either country. The number of air services to other countries would also be bumped up by 40 percent to 14 times a week.

The two leaders agreed to work on the swift approval of the revised double-taxation prevention agreement. They vowed deeper cooperation in new growth sectors such as biotech and renewable energy and agreed to build a Korea Startup Center in Singapore next year to foster entrepreneurial growth. They also signed a memorandum of understanding in cyber security cooperation to address the growing threat of cyber attacks.