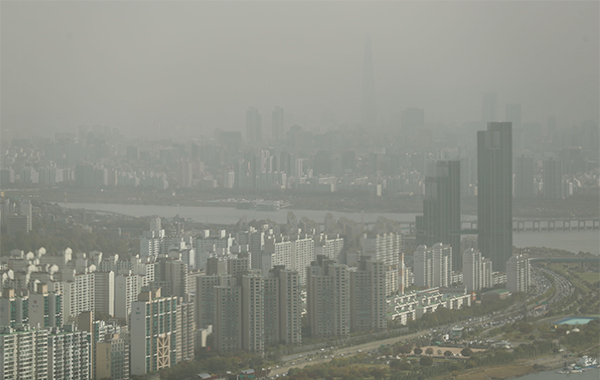 More than 30 percent of ultra fine dust in South Korea came from China, according to a joint research by Korea, China, and Japan that can set legitimate grounds for Seoul to demand remedial actions from Beijing.

According to a report released by National Institute of Environmental Research under the Ministry of Environment on Wednesday, 51 percent of local ultra fine dust emissions in major Korean cities – Seoul, Daejeon, and Busan – were self-contributed in 2017. The share was 91 percent in China (Beijing, Tianjin, Shanghai, Qingdao, Shenyang, and Dalian), and 55 percent in Japan (Tokyo, Osaka, and Fukuoka).

The report comes as ultra fine dust – dubbed PM2.5 that is particular matter (PM) with a diameter of less than 2.5 micrometers – has emerged as a major environmental threat in Korea, raising concerns about people’s health due to poor air quality.

Chang Yoon-seok, president of National Institute of Environmental Research, said that the institute in the past had announced that up to 80 percent of high-level fine dust is attributed to overseas, although the percentage could differ depending on the direction of wind. Chang noted that during high-level fine dust period from February 27 to early March, overseas contributions reached 80 percent of which 70 percent was from China.

According to the report – which is the first of its kind after Korea, China, and Japan launched joint research in 2000 – overall concentrations of sulfur oxides, PM10 fine dust, and ultra fine dust – showed a decline in the three countries in between 2000 and 2017. The report was initially planned to be issued last year but was delayed due to dissent from China.

Chang from the institute said that the latest report is significant in that China acknowledged that about 30 percent of ultra fine dust in Korea is from the country. He hoped that the report serves as a scientific document for bilateral talks on the issue to improve air quality in Northeast Asia.