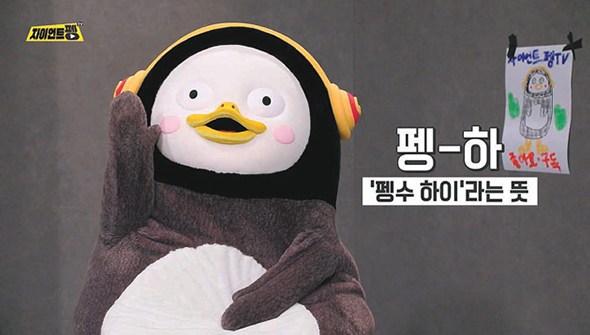 Move over Baby Shark. Big-sized straight-talking penguin Pengsoo is the YouTube character star Koreans are in love with these days and the most chased-after ad model by food marketers.

Local dairy company Binggrae said Tuesday it has approached producers of Pengsoo’s YouTube Channel, Giant Peng TV, to pitch the idea of using the character in the company’s ad campaigns.

A Binggrae official said no agreement has yet been reached but that if a deal is struck, Pengsoo may become the new face of its bestselling ice cream brand SuperCone.

Binggrae has been chasing Pengsoo after the penguin character’s participation in the company’s SuperCone Dance Challenge, a marketing campaign launched last month that offered prizes to those that best followed the awkward dance moves of the Korean soccer star Son Heung-min in a SuperCone commercial.

Pengsoo did not win, coming in at 137th, but he did win sympathy from viewers when he later posted a YouTube reaction video of his crushing disappointment after checking the results.

Pengsoo is the star puppet character of the EBS TV program Giant Peng TV. Launched in April, the program features a 10-year-old penguin that swam all the way from South Pole with a dream of becoming the world’s top content creator.

Despite it being a program targeted for kids, Pengsoo was a departure from the warm, gentle characters that were a fixture on children’s shows. With his blunt straightforwardness and fiery temper, he would make biting remarks about society and even call out his boss, the EBS chief, by his first name. He soon developed a cult-like following among young adults.

Lotte Confectionery and Dongwon Group have also expressed interest in working with Pengsoo. They are especially interested in promoting their steady sellers, the Butter Coconut biscuits and Dongwon tuna can, two food items that the character has revealed as its personal favorites.

“We first reached out to EBS after learning that Pengsoo was a big fan of our Butter Coconut biscuits,” a Lotte Confectionery official said. “But nothing has been decided yet as the product currently doesn’t run any ad campaigns.”

Market insiders say Pengsoo is now commanding contract fees of hundreds of millions of dollars that are on par with big movie stars.

Pengsoo is especially popular among 20s and 30s, the prime consumer target of the fast-changing and trend-sensitive food industry. Experts say the character is also considered a “safe” model by marketers as it doesn’t run the risk of its image being tarnished by scandals as in the case of some celebrities.

Some critics, however, say Pengsoo’s transition to commercial advertising may not be a smooth one. Pengsoo is not a character that was made to serve a commercial purpose so the contents it can generate may be limited, one industry expert observed. There is also the difficulty of aligning Pengsoo’s existing storyline with the new ad campaign. Another point of contention is said to be the method of promotion, whether to put Pengsoo’s face on new packaging or feature the products on Pengsoo’s YouTube channel.