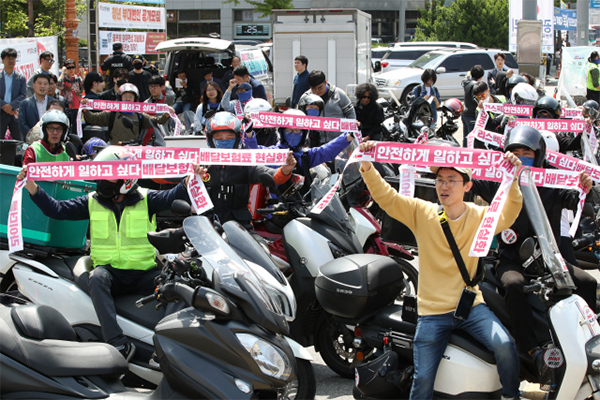 South Korea’s Ministry of Employment and Labor concluded that delivery couriers working for local food delivery platform Yogiyo are not independent contractors, but regular employees entitled to holiday allowances and overtime wages, a decision that is expected to have a ripple effect across the so-called gig economy.

Five delivery workers contracted with Yogiyo in August filed a complaint with the labor ministry arguing that they should be recognized as regular employees of Yogiyo because the company requires them to come to work at an appointed time, report their work by lunch time and go to a place it designates. They also demanded the firm pay overdue wages for their overtime.

Yogiyo refuted that it signed consignment work contract with the couriers, not regular labor contract and also had not supervised their work.

But the labor ministry sided with the couriers after studying their working pattern and circumstances, and identified them as regular workers subject to benefits and rights defined by the labor law.

It was the first administrative recognition of delivery service workers as an official employee. The latest decision is expected to bring big changes to the gig economy, a market where anyone can take work as an independent contractor.

Rider Union, a labor union of delivery workers contracted with app-based platforms, said the ministry’s decision would give a huge support to its plan to wage a campaign to prevent platform companies from abusing delivery workers.

The ministry, however, said that the latest ruling is just confined to the five workers who filed the complaint because they receive wages on an hourly basis, work on fixed schedules and run a motorbike provided by the company. The ruling cannot be applied to other delivery workers who are paid per delivery and run their own motorcycles, it added.