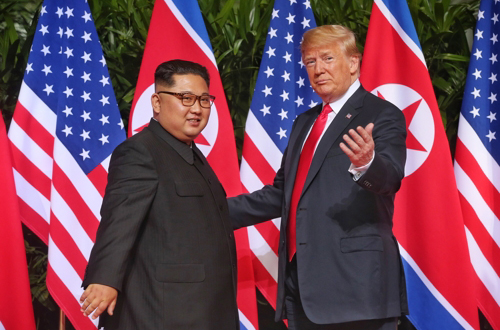 “North Korea appears to be aiming for a summit with the U.S. in December and may hold working-level talks as early as this month,” Lee Hye-hoon, chief of the National Assembly’s intelligence panel, said in a press briefing Monday after a parliamentary audit with the National Intelligence Service (NIS).

Nuclear negotiations between Pyongyang and Washington have remained at a deadlock after a February summit in Hanoi, Vietnam broke down due to disagreements over how soon the U.S. should ease its sanctions and how broadly North Korea should dismantle its nuclear program. The summit followed the first sit-down between the two nations in Singapore in June 2018, a historic meeting that despite all its fanfare, ended only with a vaguely worded agreement from the North to “work toward complete denuclearization of the Korean Peninsula” in exchange for security guarantees from the U.S.

North Korean and U.S. officials met early last month in Stockholm for the first time since the botched Hanoi summit. But the attempt to restart negotiations failed again, with North Korea saying it would no longer engage in “sickening” negotiations with the U.S. unless Washington abandons its “hostile policy.”

Pyongyang has been ratcheting up pressure on the U.S. amid the stalled denuclearization talks. Kim warned that he is set to “take course in a new direction” if the talks fail to make progress by the year-end. Last week, North Korea fired two projectiles off its east coast, its 13th weapons test this year.

Whether the December summit materializes would be more of Trump’s call, according to experts. North Korea has long insisted on advancing talks through a top-down meeting between Kim and Trump, while the U.S. has favored a bottom-up approach, with the leaders only sitting down after working-level officials have ironed out the details beforehand.

The NIS has also raised the possibility of Kim visiting China in the coming weeks to celebrate the 70th anniversary of the two countries’ diplomatic ties this year. During the visit, Kim is expected to discuss with Chinese President Xi Jinping about Pyongyang’s nuclear negotiations with Washington given the fact that Kim has consulted with Xi each time ahead of his previous two summits with Trump.