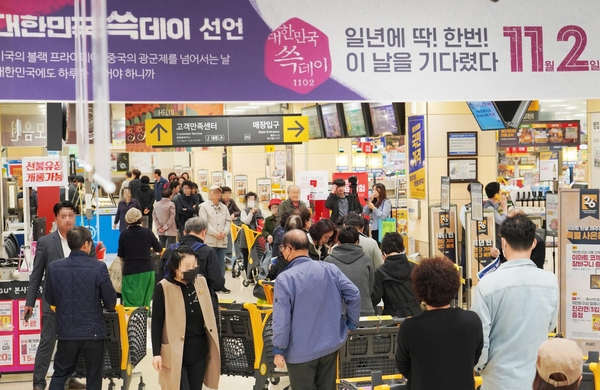 South Korean consumers who have refrained from spending for most of this year amid the economic downturn finally opened up their wallets to grab great discounts on everything ranging from foods to fashion items, white goods, digital devices and vehicles during the country’s annual shopping bonanza that kicked off Friday.

According to retail conglomerate Shinsegae Group on Monday, a total 6 million consumers purchased 400 billion won ($344.7 million) worth of items across the group’s online and offline stores during its one-day special sales event on Nov. 2.

This special deal day, dubbed SSG Day, made one out of every 10 Koreans go on a shopping spree at the online stores and offline outlets of 18 Shinsegae Group affiliates including Shinsegae Department Store and E-Mart megastore, the retailer said. Shinsegae retailers offered up to 50 percent discounts on nearly all items, buy one get one free deals, as well as gift voucher events during the one-day discount event.

Among affiliates, E-Mart offered hanwoo, or Korean beef, sirloin at half price as low as 4,750 won per 100 gram, and all stock was sold soon after store opening. Electronics were also popular among consumers – 1,500 units of 32-inch Electro Man TVs priced at 99,000 won were all sold out as well as 65-inch Traders TV and home appliances like game consoles, according to Shinsegae.

The retail giant said that 1.56 million consumers stopped by the discount store on the special event day, up 38 percent from a year ago. Sales surged 71 percent during the same period, reaching a daily record amount when excluding national holidays.

Shinsegae Group’s shopping mall complex Starfield Hanam in Gyeonggi Province even offered an originally displayed yacht at 280 million won, and it was sold to a local consumer, the company said. Shoppers also crowded Shinsegae department stores and Shinsegae Duty Free stores that offered up to 50 percent discounts on 70 brands.

Other e-commerce sites also saw sales surge over the weekend as they offered special deals with hopes to revive consumers` appetite for shopping. Gmarket and Auction, operated by e-commerce retailer eBay Korea, sold 8.1 million items from Nov. 1 to 4.

Sales of laptops and personal computers at Gmarket jumped 91 percent from the same period of last year, home appliances 20 percent and groceries and apparels 19 percent. A total 960 million won worth of Pampers Baby Dry nappies were sold and 710 million won worth of Dyson V10 vacuum cleaners over the period.

These deals were all part of Korea Sale Festa (KSF), Korea’s equivalent of Black Friday, that is the country’s biggest annual shopping festival first introduced in 2015 by the Korean government to spur domestic spending and lure foreign tourists through deep discounts.

But from this year the event, which will be held for 22 days starting Nov. 1 across the country, was mainly planned by local retailers in the private sector with minor government intervention.

The early sales data from Shinsegae and other e-commerce sites raised expectationts that the nationwide annual discount event may successfully revive consumers’ shopping desires and lead to a recovery in overall domestic consumption after years of failing to attract consumers since its launch, some market analysts expected.

Jung Yeon-sung, business administration professor at Dankook University, said that although it would be difficult to say that consumer sentiment has fully recovered at this stage but consumer demand for items will continue to remain high until the end of this month as retailers offer special events.

The country’s inflation has hovered below 1 percent throughout this year, the longest stay in zero territory since the 10-month run in 2015, largely due to weak fresh produce and oil prices. Price growth turned negative when it slipped 0.038 percent in August and 0.4 percent in September, marking the country’s first negative inflation reading since data releases began in 1965.

The consumer price index stayed flat at 105.46 in October as the country remained weighed down by fragile domestic demand and a weakening global economy.

By Kim Tae-sung and Lee Eun-joo