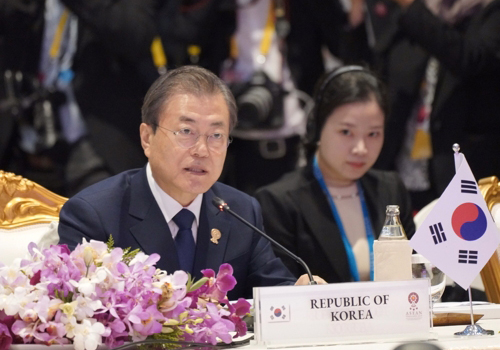 South Korean President Moon Jae-in poses for a photo with other leaders attending the ASEAN+3 summit at IMPACT Forum in Bangkok, Thailand, on Monday. [Photo by Lee Chung-woo]

“There is once again violent wind of trade protectionism,” Moon said in his opening remarks at the three-day ASEAN+3 summit in Bangkok.

He called upon the region to join forces against “wave of trade protectionism” as Asian countries combated the currency crisis of 20 years ago, taking an aim at Tokyo which has resorted to trade barriers in complaint over Korean court rulings on wartime labor issue as well as Washington and Beijing whose protracted trade war has been taking heavy toll on global commerce and economy.

He cited warning from the International Monetary Fund that nearly 90 percent of economies around the world would experience slowdown as the result of reduced global trade. 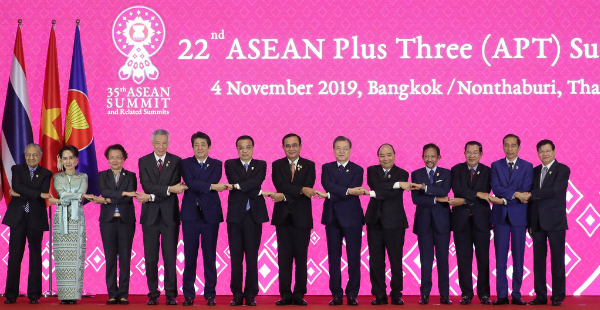 Moon called for pivotal role by ASEAN and three countries – Korea, China, and Japan – and their partnership, noting that they gathered in one place for the first time 20 years ago when the region was hit by the Asian financial crisis. 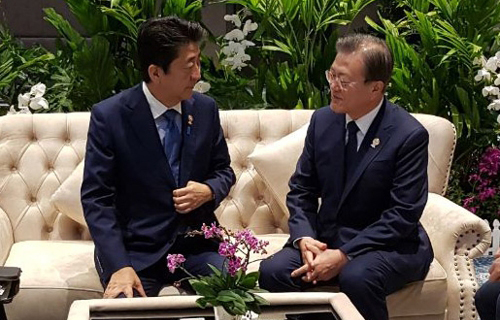 [Photo provided by the Blue House]

President Moon, meanwhile, met with Japanese Prime Minister Shinze Abe for a brief moment on the sidelines of the ASEAN+3 summit on Monday, according to the Blue House.

The one-on-one conversation, which lasted for 11 minutes, came after the two leaders greeted each other on the day before while attending gala dinner.

The Blue House said Moon and Abe reaffirmed the importance of bilateral relations and the “principle” of resolving issues through dialogue.